Chronological history of photography in Japan in 1998 (Heisei 10)

On his first day of work for the New Year on Jan. 7, Prime Minister Ryutaro Hashimoto tries out the photo sticker machine that was installed at the Liberal Democratic Party's headquarters in Tokyo. One of the frames featured the prime minister. He succeeds in making a sheet of photo stickers with his superimposed face and his real face. 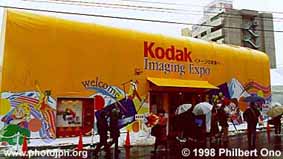 On Feb. 13, Fuji Photo Film Co. announces that it has filed a complaint with the U.S. International Trade Commission against 28 U.S. camera and photo film companies. The complaint charged that these companies, which include Konica Corp., China Film Equipment Corp., and Jazz Photo Corp., infringed on Fuji's 15 patents in the U.S. for single-use cameras. The accused companies allegedly manufacture single-use cameras or reuse single-use cameras made by Fuji and export them to the U.S. in violation of Fuji's patents. Eastman Kodak issued a statement supporting Fuji Film's complaint. Later on March 9, Fuji drops its complaint against Konica after reaching an amicable agreement to exchange equivalent patent licenses.

From late Feb. to early March, the "Eyes of History: 55 Years of Pulitzer Prize Photographs" exhibition is held at Bunkamura Museum of Art in Shibuya, Tokyo. The well-attended exhibition showed 230 Pulitzer Prize-wiining photos by about 100 photographers including three Japanese photographers. The exhibition later traveled to other Japanese cities where attendance was also very high.

On March 7, Hideki Irabu, Japanese pitcher for the New York Yankees, held an "off-the-record" meeting with the press. Video and still cameraman continued to photograph Irabu who then demanded freelance cameraman Keiichiro Hoashi's videotape. He wrestled for the video camera and also requested and received exposed film from a few still photographers. Irabu then threw the videotape on the ground and stomped on it. In the scuffle, he also stepped on the Hoashi's foot accidentally. A day later, Irabu expressed his regret for his actions. He also complained about how the press chase him around and distort his replies to questions.

At a meeting with the Japan Magazine Association and other publishing-related organizations on March 19, Education Minister Nobutaka Machimura criticized the magazine publishers by saying, "Major magazines display pubic hair on the starting pages. Aren't you all ashamed of this? No other country in the world does it." In response, the Director-General of the Japan Magazine Association said, "Nudity is art." Then Machimura struck back with, "It's not art by a long shot. A publishers' meeting should be held to rethink the matter." The publishing associations later presented the Minister a letter which included a promise to send a written notice to its 600 publishing company members to exercise self-restraint with regard to publishing hardcore violence and sex. However, most of them complained that the pubic hair issue had nothing to do with the agenda of the meeting which centered on the resale of copyrighted works.

In April, All Nippon Airways (ANA) takes delivery of an Airbus A321 jet for its domestic routes. The jet has a special livery featuring a giant strip of color slide film showing the best landscape sceneries (11 shots on each side of the fuselage) in places where ANA flies to within Japan. The passenger windows serve as the upper perforation holes of the slide film. The unique paint job was done to commemorate the air carrier's 45th anniversary since its establishment in Dec. 1952. The sceneries include Miyajima, Hakodate, Naruto whirlpools, and a castle.

On April 22, the Geneva-based World Trade Organization formally adopts a dispute settlement panel ruling in favor of Japan regarding the two-year dispute over access to Japan's photo film market. It rejected claims by Eastman Kodak Co. that the Japanese government had conspired with Fuji Photo Film Co. to keep Kodak products out of the Japanese market. Although the U.S. did not appeal the decision, it declined to agree with the report. The U.S. trade ambassador claimed that the report ignored the closed nature of the Japanese market for photo film and paper. Fuji has 70 percent of sales in Japan compared to Kodak's 10 percent. During the dispute, Fuji argued that Kodak's small share was the due to Kodak's bad marketing decisions and inferior products instead of unfair trade practices. The U.S. announced that it would continue monitoring the Japanese photo film and paper market and release semi-annual reports.

In May and June, the 3rd Month of Photography Tokyo is held with photo exhibitions at various galleries in Tokyo and symposiums at the Tokyo Metropolitan Museum of Photography. The main theme is "The Eye of Women Photographers" (Josei Shashin-ka no Manazashi). The Museum exhibited photos by established Japanese women photographers (such as Toyoko TOKIWA, Michiko KON, Ruiko YOSHIDA, Yoshino OISHI, Miyako ISHIUCHI, Yuriko TAKAGI) representing the 1945-1997 period, and the Shinjuku Park Tower Atrium was the site of an exhibition showing photos by 17 promising young Japanese female photographers like Mika NINAGAWA, Junko TAKAHASHI, and Aiko NAKANO. The "Eye of Women Photographers" symposium is held at the Museum before a full-house audience, reflecting the widespread public interest in the current boom and rise of Japanese women photographers. Also, the popular (but short) 1000-Person Exhibition: MY Best Shot exhibition held on May 29-31 at the Yebisu Garden Place center square included photos by Prime Minister Ryutaro Hashimoto (an avid shutterbug) and Tokyo Governor Yukio Aoshima. The Konica Plaza gallery in Shinjuku again showed photos taken by foreign Asian students studying in Japan.

On Sept. 4, Japan's Fair Trade Commission issues a warning to the Photo-sensitized Materials Manufacturing Association against hindering fair competition in the domestic market by exchanging monthly trade information on the production, shipment, and shipping prices of their products among the member companies. The association consists of four major domestic makers: Fuji Photo Film Co., Konica Corp., Mitsubishi Paper Mills Ltd., and Oriental Photo Engineering Co. The commission could not prove that the association hindered competition by sharing the information (since 1978). However, it pointed out that the information may have helped the companies to form tacit agreements on restricting production and shipments. Such a warning against information sharing was unprecedented.

For the first half of fiscal 1998 (April to Sept.), sales of digital cameras jump by 62% compared to the same period the year before. The Japan Electronics Industry Association's survey found that 1,559,000 units were sold during this period, 564,000 in Japan and 995,000 overseas.

In Oct., South Korea announces that it would lift the decades-old ban on the importation of Japanese movies, comics, videos, music, books, magazines, etc. This was the first step in allowing South Koreans access to Japanese pop culture (pornographic and lewd materials will continue to be banned).

Toward the end of the year, a number of high-end cameras are introduced. In late Nov., the Pentax 67 II medium-format camera is marketed. It is a major upgrade of the original Asahi Pentax 6x7 which appeared in 1969. The new camera has aperture-priority AE, an ergonomic design, an LCD panel, and compatibility with previous Pentax 67 lenses. Retail price is 290,000 yen (body only, including AE Prism Finder 67 II).

On Nov. 28, Canon markets the EOS-3 autofocus SLR camera which features new technologies which even surpass the top-of-the-line EOS-1N's. With 45-point Area AF, autofocusing can be achieved over a much larger image area than ever before. It realizes area-based autofocusing rather than the conventional point-based AF. And with Eye Control, the user can focus at where the eye looks. Retail price is 185,000 yen (body only).

In Dec., the National Center for Mental Health and Neurology (based in Ichikawa, Chiba Pref.) warned the mass media that they were adding to the stress already suffered by the residents of Sonobe, Wakayama Pref. ever since July when arsenic-tainted curry killed four people and sickened over 60 at a local festival. The normally quiet neighborhood has been swarmed by hundreds of reporters and photographers since the tragedy which shocked the nation. The press people constantly monitored the residents and surviving victims round the clock, taking pictures (even during the victims' medical treatment and checkups at hospitals) and asking for interviews. The Institute sent written proposals to media companies urging them to refrain from press activities during certain hours of the day. Meanwhile, Masumi Hayashi (37), is arrested as the prime suspect who poisoned the curry. She continues to receive national media attention during her courtroom hearings and multiple arrest warrants.

In Dec., a major book publisher designates the expression "datchu no" as one of the best three buzz words of 1998. The expression was made popular by the Pirates, a pair of young bikini idols who made the phrase popular together with the "Dat U Know" pose. This pose emphasizes the bust by squishing the chest area with both arms while the hands are placed on bent knees. The body is bent forward slightly to allow gravity to emphasize the cleavage even further. The "datchu no" is short for "da to iu no" which means "that's who/what we are" or "that's what it is."