Chronological history of photography in Japan in 1995 (Heisei 7)

A major earthquake hits Kobe and the surrounding Hanshin region in January. Over 5,000 people die.

In February, National Police Agency officers arrest photographer Kano Tenmei and Takeshobo Publishing president Takahashi Ippei for selling obscene materials. In such cases, it is highly unusual that even the photographer is arrested. Usually, only publishing company people are arrested. The police charge that Kano's photo book "Kikuze! 2" contained obscene photos. "Kikuze 2" was a collection of nude photos previously published in "The Tenmei" magazine. In July 1994, the police warned "The Tenmei" staff about the photos. However the warning was ignored, prompting the arrests. Kano at first vowed to go all the way to the Supreme Court. This gathered much interest as everyone was eager to find out what the police considered "obscene." However, Kano later relented and pleaded guilty to settle the case.

The permanent quarters of the Tokyo Metropolitan Museum of Photography opens in Yebisu Garden Place in Tokyo. Floor area of 7,500 sq. meters on four floors and one basement floor. (Read this book review about Japan's photography museums for a background story of this museum.)

In March, Casio introduces the QV-10 digital camera retailing for 65,000 yen. The great success of this camera spur other camera makers to develop low-cost digital cameras. The camera's built-in liquid-crystal display allows the user to see the captured photographs on the spot.

After undergoing a 3-year, 5 billion-yen renovation, the National Museum of Modern Art Film Center in Kyobashi, Tokyo opens with a photography department in May.

The Photographic Society of Japan holds it first Month of Photography in May and June in Tokyo. Previously, June 1 served as Photography Day (Shashin no Hi) and events were centered on this day. Now, various events were spread over a month.

In May, Eastman Kodak Co. of the U.S. files a complaint with the U.S. government claiming that non-competitive practices enabled Fuji Photo Film Co. to capture a 70 percent share of Japan's film market. The U.S. government later takes the case to the World Trade Organization in June 1996, initiating a series of WTO dispute settlement proceedings. 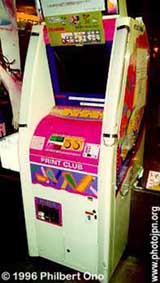 In June, Print Club machines, developed by Sega Enterprises and Atlus Amusement Co., debut at video arcades. By the end of the year, the small Print Club photo stickers become a nationwide fad among high school girls. Unlike the do-it-yourself passport photo booths, Print Club photo stickers are smaller (16 thumbnail-size stickers per postcard-size sheet) and they feature colorful frames and characters superimposed on your picture.

In June and July, the Tokyo Metropolitan Museum of Photography holds The 1st Tokyo International Photo-Biennale. 17,221 photos from 2,172 entrants in 57 countries were received and judged. The museum continues to hold the Biennale every other year.

The Kiyosato Museum of Photographic Arts opens in July in Yamanashi Pref. Hosoe Eikoh is the curator. The museum is established by a religious group called Shinnyoen.

During Aug. 15-27 in Tokyo, the Japan Professional Photographer's Society (JPS) and Asahi Shimbun Newspapers hold the "The Eye that Records and Creates" (Kiroku Sozo Suru Me) photo exhibition on 50 years of modern Japanese photography in the post-war period (1945-1995). The exhibition is held at Mitsukoshi Dept. Store in Nihonbashi (the main venue) and 12 other photo galleries in Tokyo such as the Nikon Salon, Fuji Photo Salon, and Canon Salon. A total of 1,169 photographs taken by many prominent Japanese photographers are exhibited according to genre such as documentary, sports, advertising, nudes, portraiture, nature, and wildlife. The exhibition was also held in Osaka from Sept. 28 to Oct. 17 at the Navio Art Museum and other galleries.

After 8 years of construction, the Shoji Ueda Museum of Photography opens in Sept. in Kishimoto-cho, Tottori Pref. The initial collection includes 12,000 of Ueda's works.

Extremely fierce competition in Takamatsu, Kagawa Pref. finally leads to 0 yen per color print (film development is still charged). The trend for super cheap prints soon spreads to the major cities. (Prices for color reprints remain at around 20 or 30 yen per print.)

The Internet boom hits Japan with full force with the number of service providers, Internet cafes, and photography-related Web sites mushrooming. Windows 95 is also introduced at midnight in Nov. amid much fanfare, spurring PC sales.