Chronological history of photography in Japan in 1980s (Showa 55-) 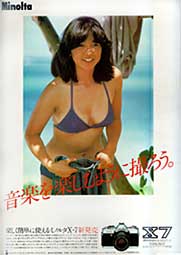 The Nikon F3 camera is introduced in Feb. as the successor to the Nikon F2 which is discontinued. The F3 is the first flagship Nikon to have a liquid crystal display in the viewfinder and an electronic shutter.The Pentax LX professional SLR camera system is introduced.

In late March, Minolta scores a TV commercial coup with a sensational TV commercial for its X-7 SLR camera which showed a bubbly Yoshiko Miyazaki (then a college student) taking off her blue jeans to reveal a blue bikini and some baby fat (see photo).

The naturalness of the footage shot under a tree on Saipan caught everyone's eye and she gained instant fame. The film was actually taken candidly until she noticed the camera. She was going to take off her jeans to do the swimsuit shoot, but did not want to be photographed while she was taking it off. So she hid behind a tree to take off her jeans. But of course, the sneaky (and sharp) cameraman could not let this golden opportunity pass and was there to record history. A poster version of the TV commercial was also produced.

The number of SLR cameras shipped for Japan's domestic market peaks in 1980 before it starts its decline in the years following.

On Aug. 24, Sony announces the Mavica, an electronic camera which used a CCD to record images electronically for storage on a magnetic disk.

The weekly magazine Focus is started by Shinchosha in Oct., focusing on celebrity gossip, political scandals, nudity, and other sensationalistic stories whose photos were supplied mainly by paparazzi. Its success opened up a new genre of magazines called shashin shukanshi (weekly photo tabloids) as other major publishers started similar magazines (Friday, etc.).

The Pentax ME-F camera is the world's first SLR camera with autofocusing. The lens had a bulky AF unit which required four size-AA batteries.

The Fuji Instant Camera Model F10 is the first instant camera made in Japan.

The Canon 35 AF ML compact camera is the first camera to have both autofocusing and auto film advance.

"Action Camera" and "Biniiru-bon" (vinyl book) are two of the buzz words of 1981. "Vinyl books" are books and magazines wrapped in transparent plastic in the bookshop to prevent people from thumbing through it. Magazines and books containing nudity were called "biniiru-bon."

The first Domon Ken Award, sponsored by Mainichi Shimbun newspapers, is presented in April. The award is for outstanding documentary photography.

The number of camera shops in Japan reaches a peak of 18,655. This number steadily decreased in the years following.

"Focus sareru" is one of the buzz words of 1982. This phrase refers to Focus magazine which had reporters searching to report celebrity scandals and affairs with photographs. "Focus sareru" means that the celebrity in question was featured (caught) by Focus magazine. Of course, after the wild success of Focus magazine, a slew of other similar magazines (like "Friday") were started by other major publishers.

The Oct. 21 issue of Focus magazine carries a photo of former Prime Minister Kakuei Tanaka in court for the Lockheed bribery trial. Fukuda Fumiaki took the photo with a hidden camera on Oct. 12. The Tokyo District Court requests the magazine publisher Shinchosha to stop the publication of the photo to no avail.

35mm SLR production falls to 5.37 million units, down by more than 30 percent from 1981's peak production of 7.67 million units. Demand for SLRs continue to fall while compact cameras become the mainstream market.

In the land of Kodak film, Fuji Photo Film is one of the official sponsors of the Summer Olympics in Los Angeles, breaking (temporarily) Eastman Kodak's long tradition of sponsoring the Olympics. Fuji's sponsorship greatly boosted Fuji Film's brand awareness, corporate image, and growth in the U.S.

A camera exhibition called "The Evolution of the Japanese Camera" is held at Eastman House in Rochester, New York from June to Aug. About 500 Japanese cameras spanning from 1903 to the present are displayed.

In Dec. 1984, the Supreme Court rules that it is constitutional for customs inspectors to ban imports of books ans magazines because of their obscenity.

Higashikawa Town in Hokkaido declares itself as a "Town of Photography" and holds an international photo festival and sponsors the Higashikawa photography awards.

Kyocera purchases a world-renowned photo collection by Arnold Gilbert of the U.S. for 550,000 dollars and donates the collection to the National Museum of Modern Art, Kyoto. The collection included photographs by Robert Capa and Ansel Adams.

On Dec. 9, Beat Takeshi's (comedian and film director) gang burst into the offices of Friday magazine at Kodansha and attacked the staff in anger for publishing a story about Beat Takeshi's illicit affair with a college coed. Beat Takeshi, also known as Takeshi Kitano, later consented to his wife's request for a divorce. The incident put these sensational weekly photo tabloids in a bad light, causing the circulation to drop drastically.

"High leg" is one of the buzz words of 1986. High-leg swimsuits exposed the girl's hips more than ever before.

The weekly photo magazine Emma stops publication in May.

"Bishojo" is one of the buzz words of 1987. Sparked by preteen Kumiko Goto, "bishojo" is a preteen girl considered to be beautiful enough to be a model.

In April, Nippon Kogaku changes its corporate name to "Nikon," the brand name of their cameras.

The April 20 evening edition of the Asahi Shimbun newspaper had a front-page photo and article about coral in Okinawa near Iriomote island that was defaced with the letters "K Y." This "scoop" was later found to be fraudulent as the newspaper's staff photographer who took the picture was the one who carved the letters in the coral. It became a major scandal and photographer was subsequently fired without any severance pay. The newspaper's president also resigned.

The Yokohama Museum of Art, which includes a photography department, opens. The museum was built for the YES (Yokohama Exotic Showcase) Expo that was held in the same year at the Minato Mirai waterfront site.

On Dec. 24, the 3 percent consumption tax (later raised to 5 percent) takes effect. This tax had to be added to the prices listed on most items, including photo books.