Chronological history of photography in Japan in 1996 (Heisei 8)

In January, the Tokyo Institute of Polytechnics and Asahi Shimbun newspapers sponsor a charity auction and photo exhibit at the Mitsukoshi Dept. Store in Nihonbashi, Tokyo. The exhibit features 430 photos by 260 photographers from 24 countries. The proceeds from sales of photos and photo books were to go to relief organizations for the Great Hanshin Earthquake.

On Feb. 1, the Tokyo Metropolitan Police Dept. arrests a 28-year-old company employee in Edogawa Ward, Tokyo for displaying "obscene" photos on his Web page. A 16-year-old boy is also brought in for questioning by the police on a similar charge. This is the first time in Japan for someone to be arrested for spreading obscene materials via the Internet. According to the police, the two Webmasters featured porno photos on their Web pages to increase the number of hits. Since their Web pages were stored in a local provider's domestic server, they were subject to arrest. However, the Japanese police cannot pursue those who display "obscene" photos stored on overseas servers. Just showing pubic hair is not considered obscene anymore. Only the actual genitalia or a sexual act is considered to be obscene in Japan (apparently). 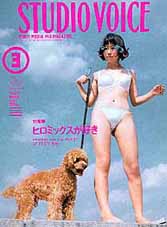 The March issue of Studio Voice magazine gave a special report on the sensational female photographer HIROMIX who also graced the magazine cover (see the image) in white underwear and hair curlers (shot by Takashi Homma). Fifty pages (out of 104 pages) of the magazine were devoted to her under the title, "We Love Hiromix." The special section contained a biography and interviews and essays by her sister, friends, and photo critics. Read more about Hiromix here and see the reviews of her photo books here (PhotoReviews).

In March, 30-year-old actress FUJITA Tomoko has the Tokyo District Court order the publisher of her nude photo book, "Toono Shosetsu," to stop publishing the book. She claims that the publisher had promised her that only her face would be used, and that the nude parts would be cropped out. Some 50,000 copies of the photo book containing her "hair nude" photos (taken by Araki Nobuyoshi) had already sold out earlier in the month.

At the center of the media uproar, the question was, how could she pose so daringly in the nude, including her pubic hair, and intend to have only her face published? Of the 93 shots taken during four days in January by Araki in Toono city, Iwate Pref., 23 were nudes. Fujita Tomoko, who is one of the stars in the popular TV drama series "Wataru Seken wa Oni Bakari," had a girl-next-door, pure and innocent image which was shattered by this photo book. She originally sought 200 million yen in damages from the publisher, but settled for 20 million yen. She had received 4 million yen for posing. The photo book, originally priced at 3,800 yen, now fetches about 10 times this amount at used book stores.

In April, the Contax AX single-lens reflex camera was marketed. Its main feature was the world's only "back-focusing AF" system where the film plane moved to achieve focus. Manual-focus lenses could thereby be used with the camera's AF system.

On April 22, Advanced Photo System (APS) cameras and film are marketed after years of development by a consortium consisting of Canon, Nikon, Minolta, Eastman Kodak, and Fuji Photo Film. The Canon IXY (ELPH in the U.S.) camera becomes a runaway hit. A few camera makers forego making APS cameras and instead concentrate on digital cameras.

After undergoing a two-month trial period, the PhotoGuide Japan Web site makes it public debut in late May by registering its URL with major search engines and online directories in Japan. Later in October, it is listed in Yahoo! under Photography Magazines to greatly boost the hit count. Biographies of Japanese photographers, history of Japanese photography, and lists of libraries, bookstores, camera dealers, photo museums and galleries, etc., are among the features which make it the world's most comprehensive guide in English to photography in Japan. 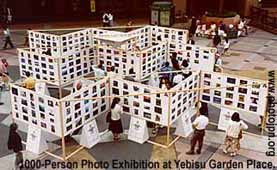 The Photographic Society of Japan holds the first Month of Photography, Tokyo (Tokyo Shashin Gekkan) in May and June. It was an expansion of activities that were held on or around June 1 (designated as Photography Day in Japan) in previous years. Photo exhibitions, symposiums, and award ceremonies were held at 32 locations in Tokyo. One popular photo exhibit was the 1000-Person Photo Exhibition (Sen-nin Shashin-ten) held at Yebisu Garden Place, home of the Tokyo Metropolitan Museum of Photography which also participated in the Month of Photography. This exhibit showed photos taken by 1,000 entrants from the general public. The Museum showed an exhibition of photos taken at the Manzanar internment camp for Japanese-Americans during World War II by Toyo Miyatake and Dorothea Lange. Fuji Photo Salon showed photos taken by foreign Asian students studying in Japan.

In June, the U.S. government files a complaint with the World Trade Organization regarding the alleged closed nature of the Japanese photographic film and paper market. The WTO later issues an interim report of its investigations in Dec. 1997. 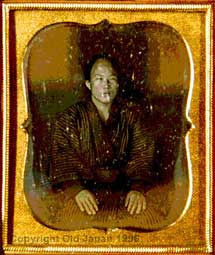 In June, Tokyo-based, vintage photo dealer IZAKURA Naomi had acquired the January 22, 1853 issue of Illustrated News published in New York which carried an article about the Eiriki-Maru crew members who got shipwrecked in the Pacific Ocean and were brought to San Francisco in Feb. 1851. She was able to match the portraits of the crew (woodblock reproductions) in the article with hitherto unidentified daguerreotype portraits held by the Kawasaki City Museum, the Yokohama Museum of Art, and vintage photo collector Terry Bennett (who owned a daguerreotype of Sentaro or Sampachi, aka Sam Patch, the ship's cook). The article revealed that Harvey R. Marks (1821-1902), a photographer from Baltimore, photographed the castaways and thus became the first to photograph Japanese subjects. Read more about this discovery in an article by Old Japan.

In July, the U.S. Trade Representative announces that it will investigate allegations by Eastman Kodak that it is being obstructed from entering Japan's photo film market. Fuji Film issues a strong rebuttal to the allegations.

In August, Eastman Kodak Co. files a complaint with Japan's Fair Trade Commission over the suspected Japanese violations of the Anti-monopoly Law in the Japanese photographic film and paper market. The Commission announces its conclusions in July 1997.

The Summer Olympics are held in Atlanta, Georgia where Nikon allows pro photographers to try out its new F5.

In August, Plaza Create Co., Ltd. announces the purchase of Vivitar Corporation from Gestetner Holding PLC, a subsidiary of Ricoh Company Ltd. Plaza Create is a large chain of "Fujicolor Palette Plaza" photofinishing outlets (700 in 1996) in Japan. Although Vivitar is little known in Japan, the brand will gain more awareness when Vivitar products are sold through Palette Plaza outlets.

In Oct., Nikon finally markets the long-awaited and long-rumored F5, its new flagship SLR retailing for 325,000 yen. It features a 1005-pixel CCD RGB sensor which meters the scene's colors, brightness, and contrast over the entire picture area. It also features multiple focusing points and an external LCD panel for the first time on a top-of-the-line Nikon.

The Yokohama International Photo Festival is held for the first time in Yokohama from October through December. More than 20 photo exhibitions, symposiums, and photo workshops are held.

On Dec. 31, Kyodo News photographer Harada Koji dashes into the Japanese ambassador's residence in Lima, Peru where Marxist rebels were holding hostages. Dubbed the kamikaze photographer by the Peruvian press, Harada held up a placard saying he was from Kyodo News. His daring move is followed by over 15 journalists who enter the residence at the invitation of the rebels for an impromptu press conference. Images of the rebels' faces are beamed to the world for the first time. Although lauded by his colleagues, Harada is deplored by the Peruvian and Japanese governments.

The Internet population continues to explode in Japan while more and more photo-related companies establish Web sites. Many more individuals also start to display their own snapshots on Web pages.

The immense popularity of Print Club photo stickers begins to spread to the general population. Long lines form in front of the popular machines which offer special frames or backgrounds superimposed on the photo stickers. By the end of the year, 10,000 Print Club machines (costing 1.225 million yen each) are installed across Japan. Average number of customers per day per machine is 100.

In response to the booming digital market amid the spread of personal computers and the Internet, camera makers introduced over 20 low-cost digital cameras in 1996. They include the Casio QV-10A, Ricoh DC-1S and DC-2, Kodak DC 50 and 20, Kyocera DA-1, Fuji Film DS-7, Canon PowerShot 600, Chinon ES-1000, Olympus Camedia C-400, Sony DSC-F1, Polaroid PDC-2000, Konica Q-EZ, and Sega Digio. Most feature a CCD with 250,000 to 360,000 pixels. Those with a built-in display panel prove to be popular since the user can see the captured photographs on the spot. 1996 sales of digital cameras in Japan are expected to exceed 1 million, a five-fold increase over 1995's 200,000 units. The age of digital photography thus goes into full swing.

In 1996, sales of single-use cameras ("film with lens") jump to a record 80 million units in Japan. The demand is driven mainly by female high school girls fueling Japan's photography boom.

In major Japanese cities, signboards advertising 0 yen or 1 yen color prints become a commonplace. Although film development is still charged (at around 550 yen per roll) and hardly advertised, the total film development and printing cost is still much lower than it was before. Reprints still cost around 20 to 30 yen per print.

The "hair nude" boom starts to wane as the pubic hair novelty wears off amid a flood of hair nude photo books on mostly unknown pin-up girls. Celebrity hair nude photo books continue to remain popular. The best-selling photo book of the year features high-school actress/singer Hirosue Kyoko who does not even appear in a swimsuit.