Chronological history of photography in Japan in 1930s (Showa 5-14)

The Ashiya Camera Club is founded by NAKAMURA Iwata, HANAYA Kanbe'e and others in Hyogo Pref.

MOHRI Hirowo of Konishiroku Honten Co. produces a f/4.5, 4-element H-type lens with Jena glass. The lens, named "Hexar," was based on the Carl Zeiss Tessar lens. "Hex" is for SUGIURA Rokuemon where "Roku" means six. The lens was a success and claimed equal performance to the Tessar lens. The "Hexar" label was used on Konishiroku's top-quality lenses up to 1959, when the lenses were renamed Hexanon.

Nippon Kogaku Kogyo K.K. manufacturess its first Nikkor photographic lens. This was later mounted on the Hansa Canon camera in 1936. All lenses from Nippon Kogaku were labeled "Nikkor" from this year on. And all pre-World War II Canon cameras were fitted with Nikkor lenses.

Koga photo magazine is founded in May by NOJIMA Yasuzo, KIMURA Ihe'e, NAKAYAMA Iwata, and later INA Nobuo. The magazine folds in Dec. the same year.

In November, Seiki Kogaku Kenkyusho (Precision Optical Instruments Laboratory), the forerunner of Canon Inc., is established by YOSHIDA Goro (1900-1993) and UCHIDA Saburo (1899-1982). They are soon joined by MAEDA Takeo and they produce the prototype KWANON 35mm camera six months later. The production model introduced in 1935 was called "Hansa Canon." It used a Nikkor lens from Nippon Kogaku. Yoshida left Seiki Kogaku in the fall of 1934, less than a year after setting up Seiki Kogaku.

Nihon Kobo photo club is formed in Nov. by NATORI Yonosuke, INA Nobuo, KIMURA Ihe'e and others. Through major photo exhibitions, they become a major influence in documentary photography.

Fuji Photo Film Co. is established in Jan. to produce photosensitized materials. In 1938, it announced that it would develop all photographic equipment including the melting of optical glass and lenses. During World War II, it made aerial cameras and lenses. After the war, it concentrated on optical glass and studio camera lenses. In 1954, all lenses were named Fujinar or Fujinon.

In May, Chuo Kobo photo club is formed by INA Nobuo, KIMURA Ihe'e, and others who quit Nihon Kobo. Together with the Kokusai Hodo Shashin Kyokai (International Documentary Photo Association) members, a photo agency for the overseas market is established.

In Oct., NIPPON photo magazine for the overseas readers is published by NATORI Yonosuke's Nihon Kobo. It introduced Japanese culture in English. DOMON Ken, FUJIMOTO Shihachi, and others join the magazine's staff.

In April, the "Super Olympic" with a lens shutter is marketed by Asahi Bussan (forerunner of Ricoh). This is the first 35mm camera made in Japan.

In June, Takachiho Seisaku-sho, forerunner of Olympus Optical Company, makes its first photographic lens, a 75mm f/4.5 modeled after the Carl Zeiss Tessar lens. "Zuiko" was the name chosen by the company for its lenses. 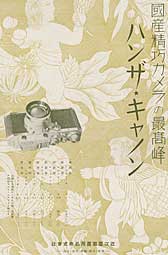 In Sept., the Hansa Canon, Japan's first 35mm rangefinder camera with a focal-plane shutter is produced by Seiki Kogaku Kenkyusho (forerunner of Canon) and sold by Omiya Photo Supply Co., Ltd. It had a Nikkor 50mm f/3.5 lens and a pop-up viewfinder. The Hansa Canon was an imitation of the Leica II. The name "Hansa" was a trademark of Omiya Photo Supply Co., Ltd. Seiki Kogaku, a virtually unknown company, still had no distributor for the camera so it gave sole distribution rights to Omiya and permission to incorporate the "Hansa" trademark. The camera was first advertised in the Oct. 1935 issue of Asahi Camera magazine. It is also advertised in English in the March 1938 issue of The British Journal of Photography and sold in Europe.

In Sept., Cameraman magazine is started for amateurs. It is the Chubu region's only camera magazine and features the work of photographers in this region.

The January issue of Life magazine features NATORI Yonosuke's photos of Japanese soldiers. The cover photo, also taken by Natori, was the first by a Japanese photographer. The magazine subsequently features more Japan-related photos by Natori in later issues.

In July, the Japanese Imperial Army and Navy issue an edict which forbids the publishing of photographs deemed detrimental to the Japanese military.

In Aug., taxes on all camera and photography equipment and materials is increased by 20 percent.

In Feb., Shashin Shu-ho magazine is started by the Japanese government to report on military activities through photos and comics. It folds in July 1945.

In Nov., NATORI Yonosuke establishes the Press Union Photo Service in Shanghai, China and puts out a photomagazine called SHANGHAI, which folds after two issues.

In May, Nihon Kobo is reorganized as Kokusai Hodo Kogei which started CANTON magazine in 1939 and MANCHOUKUO magazine in 1940 with the cooperation of the Japanese military for propaganda.

In Dec., the military facility protection law is revised to prohibit any photography from 20 meters or higher above ground level. In Sept. the following year, the police patrol areas with high hills such as in Ueno Park, Asukayama, Hieda Shrine, etc., in Tokyo. They confiscate film from 202 people. The offenders receive a reprimand and are sent home. However, later offenders are severely punished.