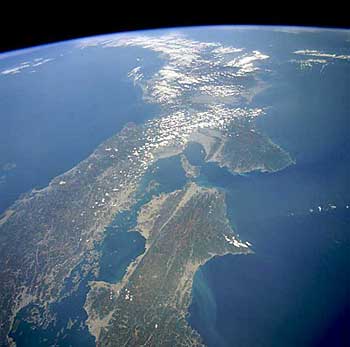 Satellite photo of Chugoku, Shikoku, Kansai/Kinki regions of Japan. Notice the earthquake fault line running through northern Shikoku and on to Wakayama in the Kinki region.

Shikoku (四国; "four provinces") is the smallest and least populous of the four main islands of Japan. It consists of four prefectures: Ehime, Kagawa, Kochi, and Tokushima. The current name refers to the four old provinces which made up the island: Awa, Iyo, Sanuki, and Tosa.

Shikoku is connected to Honshu by ferry and air and, since 1988, by the Great Seto Ohashi Bridge.