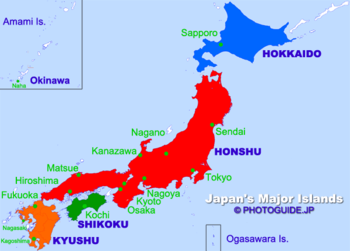 Regions of Japan: Kyushu in orange.

Kyushu (九州; Kyūshū) is the third largest island of Japan and most southerly and westerly of the four main islands. Kyushu means "nine provinces." It originally had 9 provinces, but now only seven prefectures: Fukuoka, Saga, Nagasaki, Kumamoto, Kagoshima, Miyazaki, and Oita.

Most people travel to Kyushu by shinkansen bullet train to Hakata Station in Fukuoka, or by plane to the major cities.