Upon moving to Japan from Singapore, entered Aoyama Gakuin Junior High School. At age 18, received a Leica from his father. Entered Hosei Univ., but dropped out after a year to work as a photographer at his father's company, GT Sun Co.

On Aug. 9, he was ordered to go to Nagasaki to photograph the aftermath of the atomic bombing. He arrived in Nagasaki at daybreak on Aug. 10, 1945 on the day after the bombing together with artist YAMADA Eiji, writer HIGASHI Jun, and two unknown non-commissioned officers.

They walked around the devastated city and Yosuke took about 119 photos by 3 PM when they returned to Hakata. He developed and printed the photos the same day.

His collection is the most extensive photographic record of the Bomb's immediate aftermath. The photos were published in all the major Japanese newspapers on Aug. 21 and 25, 1945.

After the war, Yosuke took over his father's business and managed GT Sun Co. and Sun News Photos. He refused to destroy the negatives of the military-related photos he took before the war and preserved them in a collection.

One of the most iconic images of the Nagasaki atom bomb was of a young mother breastfeeding her dying child as they wait for emergency treatment on the day after the atom bomb was dropped on Nagasaki on Aug. 9, 1941.

The photo was taken by Imperial Army photographer Yamahata Yosuke who was ordered to visit and photograph Nagasaki the day after the bomb dropped.

The woman in the photo was Tanaka Kio 田中キヲ who has died of pneumonia on Dec. 9, 2006. She was 91. The child in the photo was her 4-month-old second son who died 11 days later. She also lost her eldest son. She and her two sons were in the rice paddy about 2 km from the epicenter.

She led a low-key life, working as a vegetable grower and seller in Nagasaki. She was a sweet and gentle woman. Her passing has been widely reported on national news in Japan.

We offer our deepest condolences to her family.

In 2005, I did some research about a few people in Yamahata's photographs. Here is the entry for Tanaka Kio. The information is based on NHK TV's program titled, "NHK Special: Nagasaki Eizo no Shogen" (Nagasaki--Testimony of Pictures) (first broadcast in 1995) and NHK's book titled, "Nagasaki Yomigaeru Genbaku Shashin" (Nagasaki--Atomic Bomb Photographs Recalled).

This famous photo shows 30-year-old Kio Tanaka with her four-month-old son Yoshihiro. They were waiting for medical treatment at the first-aid station in front of Michinoo Station. Yamahata took five shots of this mother and child.

She was living 1.8 km north of the hypocenter with her husband and his parents, her three children, and a younger brother. Her husband worked at the Mitsubishi shipyard, but they were a farming family with fields and paddies. She had a 6-year-old son, 5-year-old daughter, and infant son Yoshihiro.

That morning, her husband and his mother went to a fishing village beyond a mountain while Kio stayed home. After the air raid siren stopped, she and her father-in-law went to weed a paddy 500 meters from the house.

Then there was a yellow flash and they fell to the ground. She ran back to the house to check on the baby. The house was on fire, and she found the baby had been thrown from the entrance foyer (玄関） to the kitchen. He was badly burned and black.

Her older son, who was catching dragonflies nearby with a friend, suffered burns all over and came home. Her 5-year-old daughter was also playing outside and just arrived home when the bomb exploded. She was also burned badly.

Kio also saw her father-in-law's shirt burning. He put it out, but he then yelled at her that her back was on fire too. She was so busy taking care of the children that she did not notice her back was on fire. They spent the night in the bomb shelter in front of the house.

Her burnt back was so painful that she could not sleep.

Since all her clothes and shoes were burnt, she was given a kimono from a house that survived the fire and walked barefoot to Michinoo Station 1.8 km away. The ground was hot and her back hurt, but she endured and kept going. Along the road, they had to walk over collapsed homes, headless corpses, and dead horses. They got to Michinoo Station at about noon. The area in front of the station was full of people.

She was put on a straw mat, but people kept coming and crammed in line to wait for treatment. Tanaka mainly wanted her children to be treated rather than her burnt back.

The doctor told her that the baby was half dead. She wondered whether her baby would die soon. That's when Yamahata took her picture (five shots).

The family went back home without any medicine or treatment method. Three children, Kio, and her father-in-law were badly burnt. The five went into the air raid shelter and remained bedridden in terrible pain.

Her first son couldn't eat or drink and became too weak to eat the fruit her mother-in-law found for him. He died on Aug. 12, three days after the bomb. And baby Yoshihiro only worsened every day and died on Aug. 21.

Her husband and mother-in-law who escaped the bomb, found a board and made a coffin for the two children who were then cremated.

Yamahata's photo was the only photo ever taken of Yoshihiro. But she cannot bear to look at the photo. The memory is too painful.

After the war, she raised four children. Since her husband's income was not enough to make ends meet after losing everything, she continued to grow and sell vegetables. She worked on her vegetable field from 8 am to sunset. During harvest time, she would pick the vegetables and load it onto a cart to sell to people. She was still doing this in 1995 at age 80.

In 1976, an anonymous postcard was received by the Nagasaki City Hall saying that the woman in the picture was still living in Nagasaki. Her address was also written. The picture had been displayed at the Nagasaki atomic bomb museum since 1973. (by Philbert Ono) 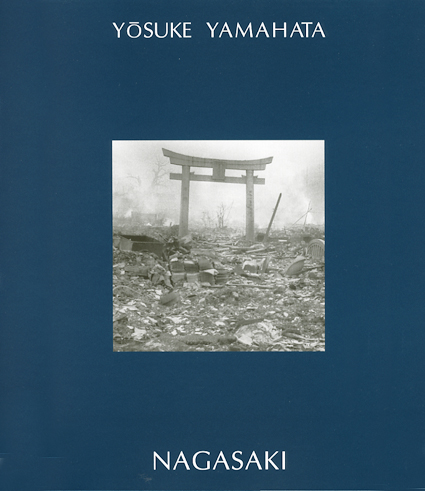 This is an exhibition catalog for a photo exhibition in Genova, Italy. The photo exhibition was part of a large Japanese art exhibition held from April to Aug. 2005 at the Palazzo Ducale, a former palace. It exhibited ukiyoe, posters, textiles, and photographs. The photo exhibition, curated by Rossella Menegazzo and myself (Philbert Ono), showed images of the Hiroshima and Nagasaki atomic bomb aftermath. This book shows all of Yosuke Yamahata's photos of Nagasaki, centering on the 100+ photos of Nagasaki taken on the day after the bomb was dropped. The book includes a photo which has never been published in a book. Many detailed captions about the people identified in the photos are also included. The detailed captions were based on an NHK TV program and book first published in 1995.