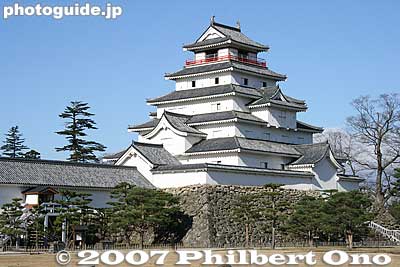 This year’s year-long, weekly NHK Taiga Drama TV series will start airing tonight on Jan. 6. Titled “Yae no Sakura,” it’s about a woman warrior named Yae Niijima (1845-1932) from Aizu-Wakamatsu, Fukushima Prefecture. Aizu-Wakamatsu is famous for Tsuruga Castle (photo) and as the site of a Boshin War battle between pro-Emperor forces and pro-shogun forces who lost. Yae was on the latter side. After the war, she fought for equality for women and mastered English well enough to write one of Kyoto’s earliest guidebooks in English. (I wonder if a copy is still available.)

Her husband Joseph Hardy Neesima or Jo Niijima had studied in the US and founded a Christian school which became the prestigious Doshisha University in Kyoto. Yae will be played by actress Haruka Ayase. I remember her in the TV series “JIN,” about a brain surgeon who went back in time to the Edo Period. She was quite good (for a former bikini idol).

Everyone hopes that this Taiga Drama series will help bring back tourists to Fukushima. Aizu-Wakamatsu is one of Japan’s best provincial tourist cities, right up there with Sapporo, Sendai, Kanazawa, Matsue, Hiroshima, Nagasaki, Kochi, Kagoshima, and Naha. It has many attractions and historical sites within a small area. The tourist infrastructure is well developed and I liked the convenient tourist shuttle bus stopping at the major sights. I highly recommend a visit to Aizu. More about the drama: http://www.japantimes.co.jp/text/fd20130104r1.html