Although he is not a photographer by trade, it is one of his hobbies (he took it up in 1970 upon the advice of HOSOE Eikoh).

He also often uses photographic images in his art work. Highly successful (artistically and commercially) and enduring artist with a unique and readily recognizable style.

Posters are his main medium for desseminating his work. They are usually collages showing a myriad of images and art work. They can be overwhelming and loud, or subtle and low-key. The rising sun (with rays), Hokusai-style ocean waves, and Mt. Fuji are prominent and recurrent images in his posters.

He can also paint in different styles. A portrait can be a realistic rendering of the subject, or more like a comic book style. He is incredibly versatile and we cannot categorize him. He has many faces.

He also seems to be somewhat eccentric with a number of unusual collections such as 13,000 postcards of waterfalls (published in a book), books with the word "tensai" (genius) in the title, and figures which are lying down. In Japan, he well deserves to be called "tensai" (genius). (2002.5.22) 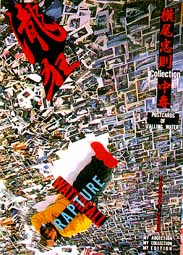 Yokoo's fanatical collection of over 10,000 postcards of waterfalls are presented in this book.

Tadanori Yokoo is a brilliant and gifted painter, print maker, and artist. He often uses photographs in his art work which often consists of incredibly imaginative and sometimes overwhelming collages. He uses a mixture of old photographs of things Japanese, ukiyoe-style (especially Hokusai) painting, and his own art. He produces a lot of PR posters and has been a well-known artist since the late '60s.

Yokoo likes to collect a number of unusual things. For example, figurines and statues of any person or animal lying down on its side.(See him on the book's cover.) He also collects books whose title contains the word "tensai" (prodigy). The most incredible collection is perhaps his 10,000+ waterfall postcards from all over the world. This book shows all the postcards in color.

Of course, ordinary people love waterfalls too. They are beautiful and always serve as tourist attractions. But only Yokoo collects over 10,000 waterfall postcards. In July 1997, Yokoo held an exhibition of his 10,000+ waterfall postcards in Osaka Kirin Plaza. The cards were neatly displayed on four high walls in a large room. The room's ceiling and floor were mirrors which amplified the effect. There were complaints that it made it "difficult" for girls wearing mini skirts to enter the room.

If you share Yokoo's interest in waterfalls or if you like to paint waterfalls and need to see samples, this would be a good book to get. (Reviewed by Philbert Ono) 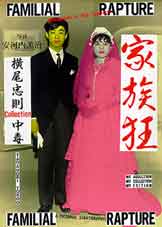 Twenty-five years of Yokoo family portraits, with a twist. 25年間に写真館で撮った面白い横尾家の家族写真。パソコンで編集されたものもあって面白い。

Tadanori Yokoo's work is way beyond surreal, fantasy, or the bizarre. It is an artistic world of his own, one that truly amazes you on how far the human imagination and creativity can go.

He typically mixes traditional Japanese elements and modern ones. He uses multiple art forms such as ukiyoe woodblock prints, oil painting, and photographs. He also embraces the computer and routinely uses digital manipulation in his work, especially for his zany poster collages. To see what I mean, see a nice collection of his posters for sale at his Web site.

One of the things I like about him and his work is the element of humor. Sometimes you can see some really funny things in his paintings or collages. This humor is ever-present in this book of family portraits taken during a period of 25 years from 1971 to 1996 by Yokoo's photographer friend, Koji Yasukochi. The photographer operated a portrait studio in Matsuya Department Store in Tokyo (initially in the Asakusa store, then in Ginza).

The cover shot was taken 1958, apparently their wedding photo. (Yokoo and wife Yasue were married in 1957.) The original photo, of course, was pure black and white. No digital editing (red lips, etc.) This is the first picture in the book. It is followed by a color family portrait taken in 1971. Yokoo has a late Beatles-era John Lennon hairstyle and he's holding a Nikon F camera. His wife is on the right side, and their two small children, daughter Mimi and son Ei, are at the center sitting on a large wooden chair. Whenever you see a family portrait, the first questions which come to mind are, when was the picture taken and how are old were they in the picture?

The "when" question is easily answered by the year mentioned in each portrait. But the book does not answer the "age" question. Well, I did some research and found out that Yokoo was born in 1936, son Ei born in 1961, and daughter Mimi born in 1964. So they start out being 35, 10, and 7 years old respectively in 1971. (Dunno when the wife was born.)

The book proceeds to show one family portrait for almost each year up until 1996 (portraits for 1983, 1985-87, and 1989 are missing). The most interesting things are seeing how the kids grow up and the variety of hairstyles Yokoo sports each time. He could've been a hairstyle model. He also does not smile for the camera. He always has this distinct, trademark stare for the camera. Sometimes his kids try to mimic his stare, but fail.

The book doesn't end there. The family portraits are followed by husband-and-wife portraits framed by his artwork and children-only portraitsy. Then there are solo B/W portraits of Yokoo from the '70s up to 1996.

Another composited picture shows him sitting on a chair with three clones of his wife each one at a different age. Then there's one intriguing digital picture of the entire family where both the parents and adult children look about the same age. Yokoo is a family man, and crazy about taking family portraits. It's a good thing. (Reviewed by Philbert Ono)