UEDA Shoji 植田 正治 (1913.3.27-2000.7.4) Sakai-minato, Tottori Pref. One of the revered elders in Japan's photographic pantheon. His photos taken on the Tottori Sand Dunes are his most famous and most widely published.

Career Photo bug since junior high school. Moved to Tokyo in 1932 and worked at a dept. store photo studio. Then studied under KIKUCHI Toyo at the Oriental School of Photography, Tokyo.

After graduating, returned to Sakai-minato and opened a photo studio in 1933. Photos came to be published often in photo magazines. Established Japan Sea Club in 1933.

One of the revered elders in Japan's photographic pantheon. His photos taken on the Tottori Sand Dunes are his most famous and most widely published. No Ueda Shoji photo exhibit would be complete without at least a picture or two of his Sand Dunes. 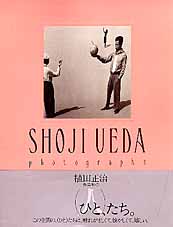 Shoji Ueda recently passed away on July 4, 2000 at age 87. He will be sorely missed by Japan's photography world. I was fortunate to meet him once at one of his exhibitions where he autographed my exhibition catalog and even let me pose with him for a picture. He was kind, and well liked by his colleagues.

Ueda's most famous photographs are those taken on the Tottori Sand Dunes with people placed like objects on the sand. His striking spatial compositions with a dash of surreal or dreamy elements won him much acclaim. There is always a strong contrast between near and far objects in his photographs. The sand dune portraits dominate the book. He had a variety of people pose on the dunes for him, including children, a group of musicians, a nude model, and even Ken Domon who was a fellow photographer. There are also self portraits of himself and his family on the sand. He looks very playful in the pictures. The pictures in the book were taken from 1935 to the early 1990s.

Shoji Ueda Museum of PhotographyBesides the sand dune photos, other pictures show children at school, a portrait of a local beauty queen, an elderly woman dressed as a sumo wrestler, and a young lady in front of tall brush.

If you ever visit Tottori Pref., be sure to visit the sand dunes and the photo museum dedicated to him. (Reviewed by Philbert Ono)