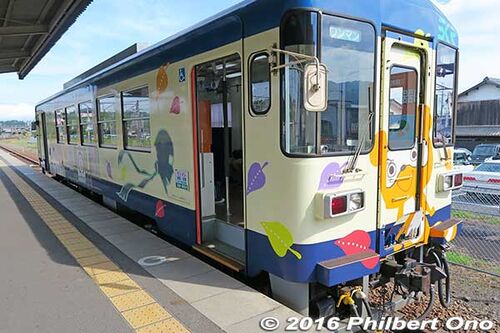 Shigaraki Kogen Railway (信楽高原鉄道) is a short train line (14.7 km) running between Kibukawa Station and Shigaraki Station. It operates entirely within the city of Koka in Shiga Prefecture. Its main purpose is to bring people from the city to Shigaraki, one of Japan's major pottery centers. Shigaraki Ceramic Park is one major attraction. It takes about 24 min. from Kibukawa Station to Shigaraki Station. It is a single-track railway with only six stations. It is the only railway in Shiga not electrified. They railway has no tunnels while running through some scenic areas.

Other than Kibukawa and Shigaraki Stations at the ends of the line, the train stations in-between are unmanned. You need to give your train ticket or pay the train driver when getting off at those stations.

After four years of construction, Shigaraki Railway opened in May 1933 as a national railway and started operating between Kibukawa and Shigaraki Stations. The original plan was to complete the railway all the way to Kamo Station on the Kansai Main Line in Kyoto. The line was never extended.

On the morning of May 14, 1991, a Shigaraki Kogen Railway train bound for Kibukawa collided head on with a special JR West train traveling from Kyoto to Shigaraki. The JR West train was packed with people heading to Shigaraki for the World Ceramic Festival. The front cars of the two trains formed an upside-down V. The horrific and shocking accident killed 42 people, including five Shigaraki Kogen Railway employees, and injured 614. The accident was due to a train signal mixup and human error. Near Shigarakigushi Station, there is a monument along the tracks where the accident occurred. A few pieces from the wrecked trains are displayed inside Shigaraki Station.

In September 2013, Typhoon Man-Yi damaged a railway bridge and other parts of the railway, forcing it to close for repairs. Substitute buses ran along the railway line until the railway reopened in 2014.