SETO Masato 瀬戸 正人 (1953- ) Thailand. Winner of the 21st Kimura Ihee Award in 1996 for Living Room, Tokyo (photos of living rooms of residents in Tokyo) and Silent Mode, a photo series of females on the street in silence.

Career Father was in Japanese military and mother was Thai-Vietnamese. Father opened a photo studio in Udon Thani in northeast Thailand a few years after WWII. Masato studied Thai in school and spoke Vietnamese as well.

In 1961, the family moved to Fukushima, the father's hometown. At age 8, he entered the first grade and his Thai fluency waned. Opened a studio in Minami Aoyama in 1981 as a freelance photographer, but there was no work. Visited his birthplace in Thailand for the first time in 20 years in 1982.

Opened photo gallery, Place M in Yotsuya, Tokyo in 1987. Started his Living Room, Tokyo project in 1989 (book published in 1996). Photo book "Bangkok, Hanoi" published in 1989. In 1994, started his "Silent Mode" photo series of females on the street in silence. 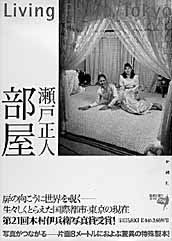 B/W photos of the living rooms of foreigners and Japanese living in Tokyo. This work won the photographer the Kimura Ihee Award in 1996.

When Seto made enlargements of the photos, he actually made the prints on roll paper, so the actual prints were also on a continuous roll of paper. I wonder how he did that. He started this living room project in 1989. It became part of the Tokyo Metropolitan Museum of Photography's exhibition on Tokyo in 1995. In 1996, he won the Ihei Kimura Award for Living Room, Tokyo and another work called Silent Mode.

The photographer was born to a Japanese father and Thai-Vietnamese mother in Thailand. At age 8, his family moved to Japan. He therefore has much affinity with Southeast Asians.

The book shows 46 living rooms occupied by a variety of people living in Tokyo. They include foreigners (mostly Asians, especially Thai) and Japanese living alone or together with others. The back cover also shows the photographer's own room with wall-size photos of the living rooms he photographed.

Each photograph is B/W, and the occupant(s) is also photographed in the room. The person's name, age, and nationality are stated under each photo. For many of the foreigners, the living room is also the bedroom so you often see the bed or bedding. The rooms are sometimes cluttered, or bare with just a futon and a small TV. To me, the rooms are not nearly as interesting as the subjects. The occupants are always more interesting, and the room they live in only tells us more about themselves.

Another photo book titledTokyo Style by Kyoichi Tsuzuki pursues a similar theme. However, Tokyo Style shows only the rooms, no occupants. Without the occupants, there is little reason to look at photographs of people's living spaces (unless they are celebrities). So I don't find Tokyo Style that interesting.

By seeing the face of the occupant and his or her room, we can make a correlation. It answers the essential and immediate question of "Who lives here?" Without any answer to this question, such photos would be best suited for interior or architectural magazines. After all, the word "style" also includes the person's dress and fashion, not just the living space.

Besides the diversity of the living rooms, the occupants are also diverse. One photo shows six Thai women packed in a six-tatami room. A few photos show the female occupant in the nude. There are also mixed-marriage couples and same- and opposite-sex room mates. They are usually in a natural-looking pose, often contemplative, reflecting, or melancholy. The rooms are messy or neat, small or spacious, and luxurious or lacking. There is a TV set in almost every room. The book has the living room, occupant, and the interface/interaction between them as the essential elements to make the photographs interesting. (Reviewed by Philbert Ono)