Book review of Shuken Urushizaki's 漆崎宗憲 photo book titled, Rules for Two--The International Marriage. Portraits of eighty international, married couples and their children (if any). Each couple also give a cardinal rule that they follow to get along in the marriage or family. 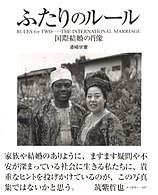 The book's author is a Japanese photographer married to a non-Japanese (an American whom he dedicates the book to), hence his interest in international marriage. He has put together an interesting collection of portraits of diverse international couples and their children living in Japan.

The neat twist to this book is that each portrait includes a cardinal rule that the couple or family abides by. It's really interesting to see what kind of rules married couples or families can make up. They can be humorous, common sense, trivial (but important), or too idealistic. Unfortunately, none of them have been translated into English. This is inexcusable because a book like this obviously should also be in English, at the very least. And since the photographer has an American wife, she could have easily written the English. There's also a lot of space on the page for English text, so there's no excuse for excluding an English translation.

To compensate for this major flaw, here are some rough translations of some of those rules for two:

"On weekends, we play tennis together."

"Every other year my husband comes back with me to my folks' home in America for Christmas. In the other years, I go to his folks' home for New Year's in Japan."

"I hug my children at least once a day."

"When there's a Japanese program, I explain it in English to my husband. And when there's an English TV program, he explains it to me in simple English words."

"We always kiss when I leave the house and when I come home." (Two couples said this.)

"We go for a walk together once a week."

"No one may watch television for more than an hour."

"Meals are prepared by mom or dad. The table is set by the (grown) children. The dishes are also washed by the children."

"When we have to go to work at about the same time, we take the same train."

"When my husband smokes, he has to do it next to the exhaust fan or outside."

"Some people break up because they claim they were not the ideal partner for each other. In our case, we work hard to become each other's ideal partner."

"While at work, I call my wife every day."

"Preparing the meals is the wife's job."

"Once a month, we go out to eat together, just the two of us." (Two couples said this.)

"During meals, we don't answer the phone."

"Washing the dishes is the husband's job."

"On the 26th of each month, we eat cake to celebrate our monthly wedding anniversay (married on June 26)."

"Before we start to argue, we go to sleep."

"When we scold one of our children, only one parent does the scolding. The other parent stays neutral so that both parents don't gang up on one child."

"Once a week, all of us send a fax to my parents in Denmark."

"We go on a family trip once a year."

"We observe the major celebrations and observances of both Japan and America." (A few couples said similar things.)

"In summer, we leave Tokyo."

"Before we sleep each night, we all brush our teeth together (with the two-year-old son)."

"When dad goes off to work, we all see him off at the door."

"Since our wedding anniversary is also our family's birthday, we all celebrate this day."

"The household chores are divided between husband and wife."

"The entire family often go to a public bathhouse together."

"We actually avoid making any rules."

"Since we both work, whoever has the time takes care of the kids."

"Since we work at the same place, we always wait for each other to finish work and then go home together."

As you can see, most of the rules can be applied to any married couple. It doesn't have to be an international marriage. Still, it's interesting to read the rules couples and families live by.

Review update (April 20, 2004): I received an e-mail from the American wife of the photographer who tells me that the book's publisher did not allow them to include English text in the book. So if you want to publish a bilingual photo book, don't go to Media Factory. English captions were only provided at the exhibition of these photos at Nikon Salon.