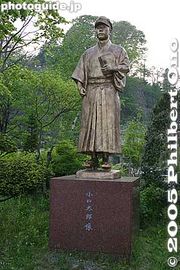 Statue of Oguchi Taro at Lake Suwa in Okaya, Nagano. 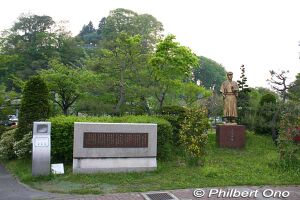 Song monument and statue of Oguchi Taro at Lake Suwa in Okaya, Nagano. Built by the city of Okaya in 1988 to commemorate Oguchi's 90th birthday anniversary. 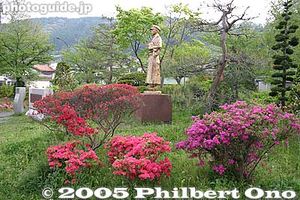 Song monument and statue of Oguchi Taro at Lake Suwa in Okaya, Nagano.

Oguchi Taro (小口太郎) (1897-1924) was the main composer of the famous song, Biwako Shuko no Uta (琵琶湖周航の歌) (Lake Biwa Rowing Song) in 1917. The song was written as a collaboration among boatmates, but Taro Oguchi is credited as being the main song writer. He was born on Aug. 30, 1897 (Meiji 30) in Minato-mura village 湊村, now part of Okaya city on the southern shore of Lake Suwa in Nagano Prefecture.

Born as the only son to father Ginnosuke (銀之助) and mother Masu (ます), he grew up in a loving and respected family with two older sisters Tamano (玉野) and Tami (たみ). He attended Minato Primary School (which has a Oguchi Taro exhibition corner) and the esteemed Suwa Junior High School (forerunner of Suwa Seiryo High School 清陵高校). He demonstrated an early talent for writing, music (violin and shakuhachi), and sports (judo, skiing, skating).

Since he was the eldest son expected to take over the family home, there was opposition for him to go away for college. However, his father was persuaded to allow Taro to apply for college at the elite No. 3 High School (later merged with Kyoto University). It was one of nine college-level schools in Japan, the No. 3 school being one of the most elite.

Contrary to family expectations, Taro passed the entrance exam, went school in Kyoto in 1914 and joined the rowing and speech clubs. In 1917, he wrote the famous song about Lake Biwa which first went public in 1918.

Perhaps the most noted artifact of Oguchi Taro is the postcard he hand-painted and mailed from Imazu on June 28, 1917 during the rowing trip when the song was finished. Oguchi wrote the postcard to a friend back at the school dorm in Kyoto. One side of the card has his watercolor painting of Omatsu (Omi-Maiko) with pine trees on the sandy beach and a boat pier. Oguchi was quite good at painting. Oguchi wrote about how easy it was to row to Omatsu the day before, thanks to a strong tailwind. He noted that Omatsu was a lonely place with only one lodge. They tied up the boat in the pond and rolled around on the sand till late night while gazing at the moon and dreaming of a beautiful girl. That morning, they played tug of war (it was fun). He also mentions that they were to lodge in Imazu that night.

He sent the postcard from Imazu on June 28, 1917 sometime between 9 pm and midnight after arriving from Omatsu. He sent it to a friend named Hiroshi Kodama back at the school dorm in Kyoto. However, the friend never received the postcard because he was back in his hometown in Niigata Prefecture for the summer.

The postcard was returned to Oguchi who kept it. If Kodama had received the postcard, he would have certainly thrown it away (as he later mentioned in an interview). This postcard has survived miraculously and it is key evidence for the exact date when they were in Imazu where the song was created.

After the rowing trip in June 1917, school started in September and they had the usual student welcoming event where the school clubs would try to recruit new members. The music club gave a performance and boatmate Taniguchi (who suggested the Hitsuji-gusa (Water Lilies) melody for the song) also sang the Biwako Shuko no Uta song. He had such a beautiful voice that the rowing club got several new members who were taken by the song. However, they quickly regretted joining the rowing club after being subjected to harsh training and practice.

The song itself was never considered to be a masterpiece by the rowing club members, even Oguchi himself. It was just a "dormitory song" written informally to be sung together by students staying at the dormitory. For example, there's the famous error about calling Chomeiji the 10th Temple of the Saigoku Pilgrimage when it is actually the 31st temple. None of the boat members ever told their family about the song either. Oguchi's parents found out that their son wrote the song only after he had passed away.

Oguchi also wanted to use a different melody for his words, a song called "Nara no Miyako" (寧良の都). It is obvious that this song melody was too long for his lyrics, but since he had musical composition talents, it looked easy to slightly modify the song to fit the lyrics perfectly. Alas, this was not to be as the song gained much love and fame while being based on the Hitsuji-gusa (Water Lilies) melody composed by Yoshida Chiaki.

He graduated in 1919 and furthered his studies at Tokyo Imperial University (now University of Tokyo) in the science department. In 1921, he invented the wired and wireless multiplex telegraph and telephone system which was patented in eight countries. He was an extremely bright young man with a promising future.

In 1922, he entered the university's aeronautical research institute as a researcher. His research was to lead to the invention of the electron microscope. However, his life soon took a downturn from 1923 when he received a military conscription notice. A love interest for marriage also did not work out as desired. His physical health deteriorated and he died the following year in 1924 at age 26 in a Tokyo hospital, an apparent suicide.

Click on the image to play the video. You can hear the music box.