Along with Hiromix, one of Japan's best-known young women photographers.

Education Graduated Musashino Art Univ. in 1995, majoring in visual communication design. Graduated from the California Institute of the Arts in May 1999 with an MFA degree in photography.

Career While still in college, won the Parco Award at the Urbanart #2 contest in 1993 for her nude family portraits which drew much attention.

In 1997, she moved to the US to study and to escape the media attention. Graduated from the California Institute of the Arts in May 1999 with an MFA degree in photography. After living in the US for three years, she returned to Japan to work as a photographer.

Exhibited photos of her live-in boyfriend (whom she later married) for the Private Room II exhibition at Art Tower Mito (Ibaraki Pref.) in spring 1999. In Dec. 2000, exhibited Pastime Paradise (also the title of her latest photo book) at SCAI The Bathhouse in Tokyo.

From the early 1990s, many young Japanese girls started to take up photography. Photography schools saw large female enrollments. By the mid-'90s, a few stars from this female generation appeared, namely NAGASHIMA Yurie and HIROMIX.

Nagashima is considered to be the first "girl photographer" to spearhead the photography boom among young girls from the mid-1990s. Her nude self portraits brought much media attention, something which she had a hard time handling. A slew of other copycat young girls started taking nude self-portraits as well.

Published a nude self-portrait photo book called Yurie Nagashima in 1995. A second photo book, Empty White Room, was published later in the same year. It showed pictures of friends. A third photo book, Kazoku (Family), published in 1998, was like a family album of photos of her family.

Later the excellent retrospective Pastime Paradise was published in Dec. 2000. It showed all her major work over the years including her famous family nudes. The book also won her the 26th Kimura Ihee Award (jointly with HIROMIX and NINAGAWA Mika) for 2000. (2001.3.21)

This is one of the most spectacular photo books to appear in recent years. It certainly created a sensation as the first photo book from a 22-year-old female photographer named Yurie Nagashima. She had already gained fame in the art world with her 1993 exhibition of nude family portraits (including herself).

As for visual impact, Nagashima's nude self-portraits in this book still surpasses those by other females who followed her. The nude self-portraits by the other girls are tame in comparison. Today, the "self-nude" theme has become well-worn and it is no longer a novelty (but still interesting).

The first picture in the book is one of the best. It's a head and shoulders portrait, with her black hair neatly combed and her face nicely made up. She looks pretty and proper. But that's the only exception. In the rest of the book, she looks wild, radical, and punkish. We see this incredible transformation right before our eyes as we flip through the book. Her hairstyle changes a few times--crew cut, short and blond, or long and black. And sometimes she's wearing a wig. Accenting her radical transformation are baby photos of herself. One snapshot shows her in kimono at age 6 or 7. These baby shots seem to tell us that she actually was once an ordinary girl. It also makes us wonder how such an ordinary girl can transform into someone so radically different.

Most of the photos are shown in a series. You usually see two different series of photos at the same time since they progress on alternate pages. Each photo covers the entire page with no borders.

One striking set of photos show her in a bathtub with her head and limbs bandaged in white gauze including an eye patch. Almost all the photos were taken indoors, apparently in her apartment. Her natural facial expressions, clothing, and personal transformation make the photo book very fascinating visually.

Nagashima's second photo book, "Empty White Room," was published in the same year. It's a collection of photos of her friends, and it lacks the impact of this first book.

Fuga Shobo, the publisher of "Yurie Nagashima," has gone out of business and so this book is out of print. Hopefully another publisher will pick up the rights to this book and print more copies. Even used bookstores don't seem to have a copy. However, you might find a copy at a public library. (Reviewed by Philbert Ono) 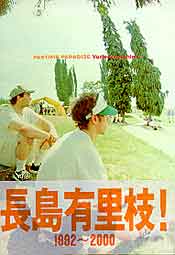 Excellent retrospective of her photographic works starting with her spectacular nudes of herself and entire family in 1992 and subsequent work up to 2000. This book won her the prestigious KIMURA Ihei Award in photography.

I've been waiting for a book like this from her for a long time. Her first and spectacular book, Yurie Nagashima (see review below), was already out of print. And I missed her sensational and award-winning 1993 exhibition which showed nudes of herself and her mom, dad, and brother.

The book appropriately starts with her B/W family nudes. It's where her photographic career started. She sports a crew cut and poses nude indivudally with each family member (also nude). Then there is a family portrait of all four of them nude. The men, however, don't show any vital parts. The photos are stark and straight-forward. How many grown daughters would be willing to show her nude body to her father and/or brother? Wouldn't it be embarassing for the father and brother? Something like this would never happen in most families. It's quite unimaginable. But she (or they) did it. It wouldn't be shocking if each family member posed nude separately. But they did it together at the same time. She says that it took only 30 min. to photograph this series of family nudes. Unfortunately, the book shows only six pictures from this series.

Next, pictures from her first and sensational nude photo book, Yurie Nagashima, are shown. The best photos from the book are presented along with other pictures that must have been taken during the same period but not included in the first book. These are all snapshots, often nudes of herself. We see her make various transformations with a bald head, crew cut, blond hair, shoulder-length hair, and wigs. (For the gory details, see the Yurie Nagashima review below.)

So far (the first one-third of the book), most of the pictures were of herself. Then she moved to the US in 1995 to get an MFA degree, and her camera focuses less on herself and more on other things. We see random, wide-angle shots of the places and people she meets, especially her boyfriend whom she later married (no wedding shots). Since there are no captions, it's hard to know when and where each picture was taken. One thing for sure, she also went to Maui (see pictures of a Hawaiian Airlines jet flying overhead, Haleakala, and the Seven Sacred Pools) besides California. There's also a shot of Diamond Head Beach Park. (If you're not from Hawaii like I am, you can ignore this.)

It's also interesting to see pictures of a few photographer celebrities such as Nan Goldin, Araki (dressed in a red jester suit at a party to celebrate his 60th birthday), and Hiromix.

This book is certainly a classic example of the photo diary snapshot genre by young female photographers. Nude self portraits mixed with random shots of friends, family, places, and miscellaneous things. Is it a brilliant work of art? Is it worth publishing as a book? Or is it just a flash in the pan? Opinions are probably highly divided among "serious" photographers. But it is a fact that she has created a major stir and trend. And apparently Japan's stalwart photographic community has finally approved by awarding her a major photography award. Snapshooting has indeed come a long, long way. (Reviewed by Philbert Ono)

A family album-type book with a spiral binding and album-like pages.

Yurie's first photo book (reviewed above) was of herself. Her next photo book (titled, empty white room) was about her friends. Now for her third photo book, it centers on her family. It's not a very thick book, but it's pleasant to hold and thumb through with the spiral bound at the center. The photographs are those which any of us could take of our own family members, but we never do. But Yurie did it and it shows how close and loving her family (mother, father, and brother) is. They are not rich, and they don't live in a large apartment. But they are happy together.

Most of the pictures show the family at home doing the mundane things that normal people do: Dad shaving, watching TV, or going to work. Mom fanning herself in summer (while topless), smoking, hanging the laundry, or changing clothes. Brother napping, playing basketball outside, grooming himself in the mirror, or studying at his desk. The last shot shows all of them massaging each other's shoulders.

This is a good example of what kind of family albums most average families can put together or should put together. Yurie's next photo book would logically center on either her boyfriend or husband.

The book cover shows her husband (who she later divorced) with a hard-on. It is an intimate collection of photos of her husband. For her, after publishing books of photos of herself, her friends, and her family, it is a natural next step.

The pictures are very graphic. Pictures that only a wife could take. There is some censoring, otherwise it would be banned in Japan. It is extremely unusual (or perhaps it's the first time) to see a photo book like this where the wife photographs the husband. Usually it's the other way around. It serves as a great example for wives to photograph their husbands. But I would never allow my wife to photograph me like that...