Fantasy-like portraits of women and nudes. Sophisticated, composited images made by hand, without any computer. 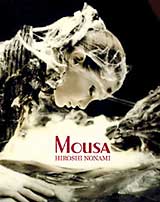 It's been 5 years since Osaka-based Hiroshi Nonami produced his last photo book. His past photo books like Abyss and E-MODE were memorable and unique. So people know and remember who he is despite the 5-year lapse.

When I first saw the Abyss book, I assumed incorrectly that all the special effects on his female models were done with a personal computer and Photoshop. I even wrote a book review claiming that it was done digitally. It wasn't until early 2005 when one of Nonami's associates told me that he does not use a computer. All the images were made by hand. No computers, no Photoshop. This was a great surprise, prompting me to correct my book review.

Now he's at it again. Although I'm still not sure how he creates these fantastic images of mostly non-Japanese women, I've been assured that he does not use a computer. There are a variety of techniques and tricks that he uses. Such as letting mold grow on the film during the summer. (That's why some images have a moldy stain or pattern.) He also stacks the slides to combine images and obtain various effects. He admits that even he often cannot predict how the image will turn out. Sometimes an error turns out to be a blessing in disguise. (Like when he found mold growing on his film and thought it was a great effect.) He does manually whatever Photoshop can do. It's a painstaking process and no wonder it took 5 years to publish this book.

Well, it was worth the wait since the results are simply stunning and mind-blowing. The models are dressed up in incredible costumes with extremely elaborate hairdos. Wings sprout from her back, a huge "flower garden" stacked on her head, vines twisting around her body, etc., etc. And there's also a lot of texture, with wrinkled or cracked surfaces, mold, etc.

The women are all goddesses. Mousa is a Greek goddess of the arts. It's interesting to note that more foreign women were willing to pose than Japanese women. Nonami surmises that Japanese models are more shy about posing nude. Yes, many of the models are nude or semi-nude (as they were in Abyss).

On the occasion of publishing this book, Nonami held exhibitions in Osaka and Tokyo in early 2005. I was invited to meet him at his show in Tokyo at the Aoyama Book Center. He turned out to be a nice guy and the exhibition of his Mousa works were outstanding.

The book is available in two editions. The luxury edition has a hardcover with slipcase (10,000 yen in Japan), and the softcover edition (what we are selling) for the rest of us. (Reviewed by Philbert Ono. Special thanks to the publisher for lending a review copy.) 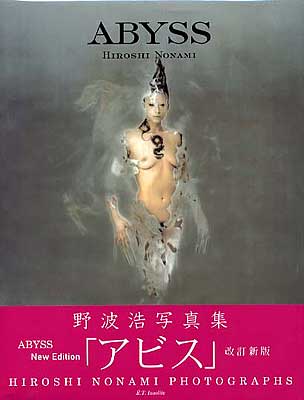 Fantastic nude images created with the computer (not!).

Oops, after all these years, I thought that he used a computer and Photoshop to create these incredible images. But no, he makes these images by hand. No digital, no computer, and no Photoshop. It makes his work even more mind-boggling. Below is my original and mistaken book review: --- This is one of the few Japanese photo books featuring digital photography as fine art. You would think there would be more people doing this kind of thing in Japan, but no. It seems that image editing with a computer is more popular for commercial purposes instead of fine art.

The artist photographed nude models in a photo studio, and then fused or juxtapositioned a myriad of things on the woman's body such as giant butterfly wings on her back, tree roots on her head, a unicorn horn on her forehead, and a fish tail replacing her legs (not like a mermaid). Sometimes it's hard to tell what was actually photographed with the model and what was added later with a computer.

All the models are non-Japanese, and all the pictures are nice to look at. I wonder how long it took him to create these fantastic images. Since Abyss was originally published in 1993 (this book is a reprint), computers then were much less powerful and much slower than today's PCs. He must have had many coffee breaks during the times he had to wait for Photoshop to finish a task or save an image. He has done similar digital images for Makiko Esumi in E-Mode. (Reviewed by Philbert Ono)

This is her second nude photo book and a terrific follow-up to her first one (see review above). She's got class, and an eye for art. This is a fine-art nude photo book, not one of those idol-type nudes nor sensational-type nudes.

Her first nude book had a horizontal format, but this book is totally vertical. She's getting really botanical with a lot of roots, flora, vines, and leaves interwined with her body. Sometimes it looks like she's transforming into a tree. Being a former fashion model, she's very good at posing for the camera. The photos have a dreamy look to them, with greenish-yellow tones. They also look like fantasy, with huge angelic wings sprouting from her back or a unicorn horn coming out of her head. There seems to be a lot of digital editing and enhancements in the photos, but the photographer does not use a computer. It's all hand-made images.

This is no doubt one of the finest nude photo books in recent years.