Timeless and surreal B/W landscapes taken in several states in the US during the early '70s.

Narahara is a well-known, award-winning photographer in Japan. I would call him an atypical street and travel photographer or a genuine fine-art photographer.

These are B/W photographs taken during the photographer's travels in the US while he lived in New York in 1970-74. He criss-crossed the country east and west and north and south a few times by car. The book is also a reincarnation of his earlier book titled, Where Time Has Vanished, published in 1975. This new edition is almost the same as the earlier edition except for nineteen additional photos.

These are not typical travel photos of course, but it looks like a combination of surrealism, still lifes, and abstract fine art. They are high-contrast shots with a lot of perspective featuring strong foreground and background elements. You get a very open and airy feeling.

The cover shot of two garbage cans was taken in Sky City, New Mexico in the Amerindian village. They appear to be floating above the ground, but if you look closely, you can see that they are hoisted on a short pole. This shot has become one of Narahara's trademark images.

The photographs were taken in various states like Arizona, Utah, Colorado, South Dakota, New York, Montana, New Jersey, Florida, and California. You can definitely sense that the photographer is traveling. Only a few shots show people, and all are B/W except the last image which shows the nighttime launch of Apollo 17 streaking up the sky in Florida in 1972. It was the last mission to the moon. The photographer writes about this photograph in detail in his essay at the end of the book. (Also translated into English.)

All the photos are captioned with the title, location, and year. All are translated into English as well. The translator, Chris Drake, did a good job too. (Reviewed by Philbert Ono) 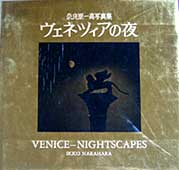 Venice is one of the great tourist meccas of the world. And we have yet another photographer shooting this city on water.

But his photo eye is different from the others, and his photos bring a different perspective of this much-photographed city. Everything was shot at night and in B/W. The elements of light and darkness come into play in his marvelous compositions.

The photographer first visited Venice in the 1960s and fell in love with the city "on the spot." He returned in 1973 and those Venetian nights "stole his heart again and again." He finds the city beautiful with an immense power of attraction.

In the 1970s, Narahara saw the passing of his mother and several dear friends. He was able to seek solace in the "dazzling, opulent darkness" of Venice. "The brilliant darkness was always not yet dead, always moving toward death, but still always on the side of life. The lights of the Venetian darkness appeared to possess life and started to take on new life." So he writes.

The photos are divided into several sections such as, "Lines of Luminance," "Bridges," "Labryinth," and "Piazza San Marco."

First you see two photos taken during sunset. Then there are a lot of long exposures showing trails of light over a canal made by boats. Photos of Piazza San Marco, the city's main square, are also long exposures showing no people. Sometimes there's lightning streaking through the dark sky. The final images are of fireworks held during the famous Carnival.

The photos were taken during 1973 to 1983. You hardly see any people in the photos, all in black and white. There are no individual captions, but it probably doesn't matter. The photographer's essay is also translated into English.

This work won Narahara a major award from the Photographic Society of Jaopan in 1987. (Reviewed by Philbert Ono)