Career Went to America as a trainee for the Agricultural Ministry. Worked at Kikuchi Studio (operated by KIKUCHI Toyo) in New York in 1919.

Established Rakan Studio on 5th Avenue with wife Masako in 1921. Sold the studio and went to France in 1926. Returned to Japan in 1927 via the Trans-Siberian Railroad. Moved from Tokyo to Ashiya in Hyogo Pref. in 1929.

Formed the Ashiya Camera Club with HANAYA Kanbe'e and others in 1930. Established Koga magazine with KIMURA Ihee and NOJIMA Yasuzo. Went to Manchuria in 1940 upon the invitation of the Manchurian Railway. (2001.1.18) 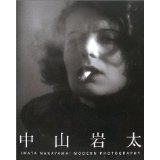 Major retrospective of this photographer best known for photo montages.

This book provides an excellent retrospective of all his subjects and themes. It shows many images, about 700 (this explains the high cost of the book). The images were taken in the places he once lived like New York and Paris, and while at his home base in Ashiya, Hyogo.

Half the book shows one image per page. But the second half shows smaller images, up to six per page. The images cover a very wide variety of subjects centering on photo montages, portraits, and landscapes. Splendid collection. The portraits really reflect the times of his day, and the portraits of Japanese women in kimono are quite quaint.

The end of the book also includes essays and a chronology of his life. The photos have titles, but everything is in Japanese.