Career Raised in Tokyo from 1956. Apprenticed under photographer Shigeru Akiyama 1979-1980. Turned freelance photographer in 1980 and worked for magazines and advertising. (2002.11.09)

Urban landscapes of Tokyo minus the people.

Collection of photos showing urban scenes of buildings and streets in Tokyo, but without any people. All the people and cars that would normally be in the photo are not pictured. The major sidewalks are bare and the roads are empty of moving cars. (Only parked cars are pictured.)

The technique of using long exposures to make moving people and things disappear from the photograph is nothing new. So initially I was not too impressed. But he created these humanless photos over a ten-year period from 1990 to 2000. For his efforts, he was awarded the Newcomer's Award from the Photographic Society of Japan in 2001. (Award judges like people who pursue long-term themes and projects.)

Assuming that he did use the long-exposure technique, my question is how was he able to stand in the middle of the busy street or highway and take the long exposures? It's possible that he had a faraway and safe vantage point and just used a telephoto lens to make it look like he was on the street.

There are about 70 photos on full-page or double-page spreads. He used a large-format, Tachihara 8x10 in. camera. He also kindly gives a list in English identifying all the peopleless places. The book has turned out to be a bestseller with a sixth printing as of Sept. 2002. (Reviewed by Philbert Ono)

Photos of Hong Kong at night from unconventional perspectives.

The photographer's fascination with Hong Kong started in 1993 during his first trip there for a photo shoot. He thought the whole place was made for him to photograph. The mix between the old and new, the West and Orient, and the rich and poor were quite overwhelming.

He is attracted to things that are hidden or in the shadows, going unnoticed but still important. He expresses regret at how the traditional and local flavor of Hong Kong were being lost due to modernization, progress, and the infusion of other cultures.

With this book, he attempts to show some of the unnoticed but precious things in the shadows of Hong Kong at night. Most of the photos are of back alleys, old buildings, and decrepit places. A lot neon and night lights too. There are also a few refreshing portraits of young women, men, and couples posed in an old building or room.

The location of all the places in the photos are cited in English and Chinese. His essay is also translated into English, but kind of difficult to comprehend. 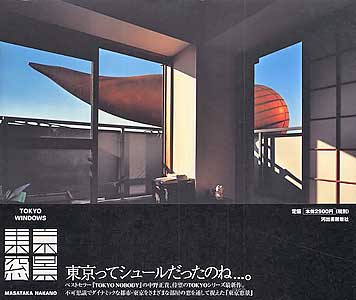 Most famous for his Tokyo Nobody photo book, the photographer now provides a new series of Tokyo photos. This time it's scenes of Tokyo through a window. It sounds frivolous, but he has captured a great variety of such scenes. Outside the window, we see quite a few recognizable landmarks such as Asahi Beer's giant froth (or giant poop), Tokyo Tower, shinkansen bullet train, and the Sumida River. He seems to have concentrated on nice-looking or funky windows showing an interesting or typical outdoor scene.