MORIYAMA Daido 森山 大道 (1938.10.10- ) Ikeda City, Osaka. Internationally recognized photographer. Most noted for his photos taken in the turbulent 1960s and early 1970s. The photos were called "Bure Boke" (Shaking and Blurred) in reference to his photos' blurriness, coarse grain, and very high contrast. This rough style was his trademark which he says reflected his inner outlook and thought of people and the world. A B/W picture of an ordinary dog, one of his best-known images, looks sinister and menacing due to the high contrast and grain.

Education Dropped out of high school.

Father worked for a life insurance company which required the family to move several times. Studied graphic design in high school before dropping out. Becomes a freelance graphic designer in 1958 when his father died in a train accident.

In 1963, married and turned freelance photographer. Started to photograph Yokosuka in Kanagawa in 1964 and the photos were published in Camera Mainichi magazine the following year. Met magazine editor NAKAHIRA Takuma in 1964 who became a rival, friend, and major influence.

In 1966, besides Yokosuka, started photographing Atami, Shinjuku, and Asakusa. In the same year, opened a joint office with NAKAHIRA Takuma in Shibuya, Tokyo.

Won the Newcomer's award in 1967 from the Japan Photography Critics Association for his series on entertainment celebrities.

In 1968, joined the TAKANASHI Yutaka, TAKI Koji, NAKAHIRA Takuma, and OKADA Takahiko to work on Provoke magazine from the second issue. Their photos featured rough and grain and high contrast.

From 1969, busy with camera and documentary magazine work. In 1970, contracted to shoot the cover for Asahi Camera magazine for one year. He also was the sole artist (against his wishes) to be featured in the final issue of Provoke magazine in March 1970.

Traveled overseas for the first time in late 1971 to New York upon the invitation of painter TADANORI Yokoo. Used a half-frame camera to photograph New York.

In 1977, opened his own photo tutorial school in Shinjuku, Tokyo (closed in the following year). Held his first overseas solo exhibition in 1980 in Australia. After a inactive, slump period, started to photograph again in 1981.

In 1983, became one of the judges for the Nippon Camera magazine's monthly photo contest.

Detailed biography in English at his official Web site.

The Times of the Dog - Inu no Toki - 犬の時間 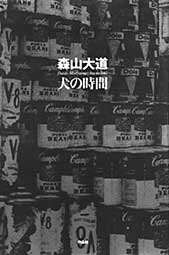 The book title translates as "The Times of the Dog." Grainy B/W street photos of New York, Okinawa, and Tokyo taken during 1964-1983.

I'm finally filling a gaping hole in my collection of book reviews. Until now (Jan. 2004), PhotoReviews has had no reviews of Daido Moriyama books. Of course, I've looked at his books and was impressed by his artistry and eye for street scenes. But I couldn't really understand it. If I don't understand it, I can't really talk about it. Also, his best books are out of print. For these simple reasons, I've avoided reviewing his books.

But I knew that someday I would have to introduce his books since he's such a major figure in Japanese photography. Also, I know there are collectors who buy premium photo books (available through our Auction Proxy Service). However, don't expect much from my reviews of his books. Anyway, welcome to my first Daido Moriyama book review.

This book is filled with grainy, high-contrast, black-and-white street shots mostly taken in the 1970s. The images are miscellaneous and totally random: People on the street, a parking lot, a pachinko parlor, store fronts and restaurant signs, subways and trains, etc., etc. The real world that looks unreal through Daido's eyes. The 188 photos are captioned with the place (New York, Okinawa, or Tokyo) and year.

At the end of the book, there's an interesting Afterword in Japanese and English. It describes his photographic biography from age 26 to 45, reflecting the period when he took the photos in the book. He writes, "I spent a whole year wandering around aimlessly like a stray dog in the street..." Now we know where the book's title comes from. I would never call Mr. Moriyama a dog though. The biography reveals his development as a photographer after he quit being Eikoh Hosoe's assistant in 1963.

Only 1,500 copies of this book were published. Obviously, it's out of print. At auction, the book goes for at least 30,000 yen. (Reviewed by Philbert Ono)

Places in My Memory, Final Chapter 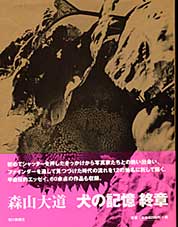 Book form of a series of essays originally published in Asahi Graph magazine during 1997.

Book of essays (in Japanese only) recalling the places in Daido's memory. They include Paris, Osaka, Kobe, Europe, Shinjuku, Yokosuka, Zushi, and Sapporo.

The essays are mixed with grainy, high-contrast, B/W photos of the respective place.

There's an earlier book titled Places in My Memory, published in 1984. This was a similar series of essays with photos that were originally published in Asahi Camera magazine. 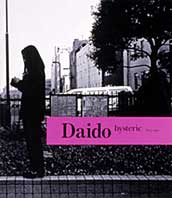 The "hysteric" series of photo books by defunct publisher Hysteric Glamour often featured Daido. This is one of them. The autographed copy I'm reviewing was acquired at Yahoo Japan Auctions in Dec. 2003 for 74,000 yen. Like wow.

The large format makes the 177 B/W images very impactful. I had to stand up to look at the book on the table since the images are so big. Many of the photos are on double-page spreads.

It's all miscellaneous street shots in mainly Tokyo. They are mundane and typical street scenes of people walking, crossing the street, riding in trains, etc. The only exception was the shot of a woman peeing on a busy street gutter over a storm drain in broad daylight. That was the least typical.

A Journey to Nakaji - 仲治への旅

The 42 B/W plates are street photos of miscellaneous things. There are no captions, no essays, and no hint what the book is about. I'm not sure where Nakaji is either. It could be a seaside town since the final few pictures show beach scenes.

As B/W art, the images are good. At auction, an autographed copy can go for around 45,000 yen. Incredible!

Slim book of 41 B/W photos. The book title in Japanese literally translates as "Dreams of Water."

Although the book's official English title is just Memories, the Japanese title means "Dreams of Water." Keep this in mind because many of the images show water: rivers, ocean, reservoir, puddles, and pond. The end of the book has a list of captions indicating the place and year of each plate.

The images have high contrast, but they are not overly grainy. They are actually quite normal and serene and not as chaotic as other images by Daido. At auction, an autographed copy can go for around 13,000 yen.

This is the first time these two famous Japanese photographers collaborated on a photo book and exhibition together. The photos were taken by both men on the same day in Aug. 2004 in Shinjuku, Tokyo.

They just wandered around Shinjuku and snapped away. The book also served as the exhibition catalog for their joint exhibition at Tokyo Opera City near Shinjuku during early 2005. Some 200 images are in the book. Essays are all translated into good English.