Book review of Keiko Matsuzaka's photo book, Sakura Densetsu. She's completely nude at age 50!! Big-budget book that was a collaboration between her and Rei Nakanishi, a prominent writer.

Keiko Matsuzaka, one of the most beautiful actresses Japan has ever produced, has given us a big summer surprise with this totally unexpected "hair nude" photo book. It certainly breaks a long, dry spell of mostly second-rate idols and unknowns posing nude in the past few years. We finally have a big-name celebrity in a nude book, even though she's already middle-aged.

As you may know, Matsuzaka has appeared nude in an earlier photo book (see review below) and in a few movies (the last time was 12 years ago). So it's doubtful that this book will cause a major sensation.

At first, the book looks puzzling because the cover shows cherry blossoms in full bloom. This is fine if it were March or April when the cherries bloom in Japan. However, this book appeared in early Aug. 2002 in the summer heat when images of beachgoers, watermelons, snow cones, and fireworks are more common.

The actress's name is on the cover so you know it's a photo book. But there is also another name, Rei Nakanishi, bearing the title of "Writer" and "Producer." He sounds like an author and movie director, and you might think the book is a collection of movie stills.

However, it is not a book of movie stills, and the book's title (Sakura Densetsu, which translates as Legend of Cherry Blossoms) is not named after any movie. This is a book produced like a movie, with Matsuzaka "acting" in the lead role instead of posing like a model. There's actually a plot behind the photos.

The plot was written by Rei Nakanishi, an award-winning (Akutagawa Prize) writer and composer. It came from his short story called Sakura Densetsu that he wrote for a monthly women's magazine in April 2002. The story is drawn from an ancient legend that says cherry trees have a female demon, called "Sakura Oni," lurking within. This malicious demon wreaks havoc on people's hearts (usually related to love). In fact, there are many Japanese legends and stories which concern cherry blossoms and tragic love. Nakanishi even surmises that there are lovers' corpses buried beneath ancient cherry trees.

Excerpts from Nakanishi's original story are inserted in the book. It is about a 33-year-old college professor who meets a 20-year-old college coed under a 1,000-year-old cherry tree at a temple in Nara. They have sexual relations and get married after she graduates from college. Not long afterward, the husband has a heart attack and sex becomes hazardous to his health. So he is forced to abstain while his wife, still in her peak years, is left sexually frustrated.

Despite his heart condition, the husband later has an illicit affair with a college coed who is the daughter of his former girlfriend during his college days. The wife (Matsuzaka) finds out about the affair and decides to have a large cherry blossom design tattooed on her body. After the tattoo is completed a year later, she feels reborn. In the end, she kills her husband by putting potassium cyanide in one of the capsules he was taking for his heart condition. And she takes one of capsules and kills herself as well.

That's the gist of the story, and the photos sort of follow along this plot. The book opens with photos of the story's setting, a temple and a large cherry tree. Matsuzaka is in lingerie or nude in a hotel while supposedly happily married.

The next series of pictures show her as the Sakura demon under this large, 1,000-year-old cherry tree. She is in a kimono with make-up making her look devilish. The cherry tree is actually 900 years old, located at Butsuryuji temple which is within the grounds of Murouji temple in Nara. Nakanishi thought the tree was the perfect example of where a Sakura demon would lurk. So he made it part of his story's setting.

The next sequence of photos show her nude with thin, gold leaf plastered all over her body. Then she's in a white kimono in a Japanese-style room. After that, she's in a pink kimono and tied up with rope.

Then you see full-length nudes in color, and you can see how well she has kept in shape. Three months before the shoot, she went on a diet and worked out regularly by going to the gym, doing classical ballet, etc. The effort certainly paid off. She looks at least 10 years younger in the photos.

She also appears nude and in bondage. The final section of the book shows her getting a large cherry blossom tattoo on her back and upper thigh. She then appears totally nude for a full-length shot with the tattoo and pubic hair showing. The book has 95 photos, and about half are nude or seminude.

There is no picture of her "husband" nor "the other woman." So although the book supposed to be like a movie, ultimately, it's a photo book of one person. More than anything else, it is a Keiko Matsuzaka nude photo book.

So why did she do it? At the book's press conference, she said, "I wanted to broaden my horizons as an actress." To her, the photo shoot felt like being in a movie. She also stated that she decided to pose nude as a matter of course as the photo shoot progressed, implying that she originally did not intend to pose nude.

You would think that she did it to commemorate her 50th birthday (or her final year in her 40s). But this was not mentioned at all. She also declared that her marriage was very happy, and that she had the full support of her husband. (There have been celebrities who posed nude due to a divorce or pending divorce.)

Besides publishing the book in the wrong season, Keiko Matsuzaka has gone against almost all other conventions of making a celebrity nude photo book.

For one thing, her photographer is an unknown, and not Kishin Shinoyama (bravo for that!). The photographer, Mitsuhiro Mori, has done a few nude photo books, but all of his subjects were unknown idols. My guess is that a famous photographer like Kishin would have been too overbearing with his own creative ideas.

The book was also a collaboration between the celebrity and someone other than the photographer. The book is clearly billed as a collaboration between Matsuzaka and Nakanishi. The photographer is pretty much out of the picture (his name does not even appear on the book's front cover). He probably was more of a technician who just received and carried out instructions and took care of the technical details like pressing the shutter button.

This book also had a big budget. Normally, celebrity nude shoots require only one photographer, an assistant or two, and a make-up artist and hair stylist (usually the same person). But for this book, a large, movie-like production crew was hired. Besides the usual make-up artists and hair stylists, there were staff for the kimono, wig, tattoo design, and large and small props. There were seven photographer's assistants as well.

With regard to making a nude photo book, Matsuzaka has shown how it's done. She has proven that you don't need a big-name photographer. And the idea of collaborating with someone other than the photographer is revolutionary if not radical. She has elevated the standard for making nude photo books by at least a few notches. Let's see who can top this one. (Reviewed by Philbert Ono) 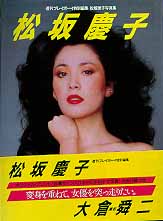 If there's any Japanese woman who epitomizes the word "beautiful," it's Keiko Matsuzaka (b. 1952). Without a doubt, she will go down in Japanese entertainment history as one of the greatest "Nihon bijin" (Japanese beauty) of all time. You never get tired of looking at this incredible woman.

When you hear the phrase "And God Created Woman," you may think of Brigitte Bardot (in her younger days) and Keiko Matsuzaka. In 1990, many of us got disappointed when we heard that she finally got married. Our disappointment soon turned into disbelief when we saw who she married. He was an unknown musician with long ruffled hair. He was certainly way off the mark from what we expected her beau to be: A Rhett Butler or Robert Redford type. This ho-hum guy was her husband? You mean she waited all this time just for him??? What irony.

Keiko Matsuzaka has had a long acting career which started in 1970. In the late 1970s, she gained wide fame with her sex appeal. She has matured into a very talented and beautiful actress with a very long list of acting awards.