Internationally-recognized woman photographer who photographs things and people around her, but unlike that of other young-generation female photographers.

First showed her Utatane series at Guardian Garden in 1998. Winner of the 27th Kimura Ihei Award in 2002 for Utatane and Hanabi. 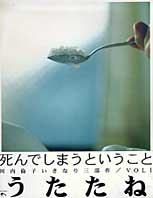 Vol. 1 of an award-winning book by Japan's newest female photographer in the limelight. Utatane means "catnap."

The years 2001 and 2002 will be unforgettable for Rinko Kawauchi. In October 2001, publisher Little More put out three books of her photos at the same time (two of them are reviewed on this page). A few months later in spring 2002, she won the prestigious Kimura Ihei Award for two of the books from Little More. And if that wasn't enough, the Photographic Society of Japan later voted to give her the Newcomer's Award for 2002 (along with Yuki Onodera).

Her name and photos subsequently appeared in all the major camera magazines and she will have photo exhibitions at major photo galleries such as Fuji Photo Salon in Ginza, Tokyo and Minolta Photo Space in Osaka in May 2002.

What an incredible chain reaction it has been for this relatively unknown (but now known) photographer. It's like she's the new darling of Japan's photography world which has showered her with awards and lots of recognition.

For what, you may ask. Well, those books which started it all seemed to have clicked with the powers that be in Japan's photography circles. So what kind of photos are they?

It's sort of difficult to explain. Utatane shows miscellaneous snapshots of everyday things such as the sky (and birds), the shimmering surface of a lake, sunny-side-up eggs, carp (lots of them with mouths open) feeding in a pond, someone's hand, a party popper, people inside a train, and laundry spinning inside a washing machine.

The usual photo diary-type photos you might think. Well, that's what it looks like at first, but if you look at the pictures side by side, there seems to be some kind of visual or underlying association between the two photos on the facing pages. (There's one picture on each page.) As you go through the book, it becomes obvious that she put the photos together in deliberate pairs on facing pages.

Some of the pairs I can figure out. For example, there's a photo of a large tree's roots on the left page, and a close-up of a girl drinking a glass of water on the right page. Both are sucking up water, right?

Another pair: A close-up of a net (such as on a tennis court) with one string ready to break apart. The opposite photo shows a girl blowing bubbles. Both objects are on the verge of breaking, right?

Another pair: Many carp with wide-open, round mouths jostling in the pond for fish food. Opposite photo is many sunny-side-up eggs cooking on a grill (upside down). Both have a lot of round spots, right? Visually, the photos are a nice contrast.

Another pair: A car being filled up at a gas station. Opposite photo shows a kitchen sink with water dribbling out of the faucet into the drain. Both are spewing out a liquid, right?

Another pair: There's a girl jumping rope on the left, and a truck's tire spinning on the road on the right page. Both things rotating, right?

So it is possible to figure out some of the photos. But for most of them it's near impossible to see the connection. For example, there's a picture of tadpoles in a muddy pond on the left page, and a shot of a horde of people crossing the street between Shinjuku Station and Takashimaya Times Square. Gee, what's the connection here?

Only two photos evoked my emotional reaction. The picture of a dead pigeon on the sidewalk (with people walking by) with red blood oozing from the head (pretty sad and awful to look at). Then there's a guy lying down shirtless, with hundreds of fake flies placed on his body.

The publisher says that it is a book that conveys life and death. Yeah, but I'm sure there's more to it than that. The book's title is also puzzling. It means "catnap," but you don't see any people or animals taking a nap. Perhaps it refers to the state of being alive, but essentially dead while you are asleep. I hope I can meet the photographer someday and have her answer all these questions. (Reviewed by Philbert Ono) Reviewed on: 2002-05-19 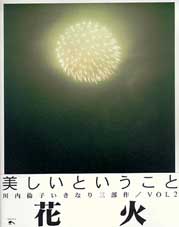 Hanabi means "fireworks." Vol. 2 of an award-winning book by Japan's newest female photographer in the limelight.

Unlike in the U.S. where people shoot fireworks on the fourth of July and New Year's, Japan's fireworks season is in summer.

Like going to an outdoor swimming pool, eating a snow cone (shaved ice), eating watermelon, and hearing the shrill of cicadas, fireworks is closely associated with summer in Japan. In July and August, fireworks displays are held all over the country. They are literally called "fireworks contests" (hanabi taikai) where master pyrotechnicians compete and show off their fireworks. "Hanabi" literally and appropriately means "flowers of fire."

If you've never seen summertime fireworks in Japan, let me describe it. It is usually held along a large river or waterfront area or beach. About an hour before the fireworks is scheduled to start (usually 7 or 7:30 pm), the nearby train or subway stations are jammed with people going to the fireworks site. Many young women are dressed in colorful yukata, a light cotton kimono. Some people carry coolers holding cans of beer. For many people, seeing hanabi is a great excuse to have a night-time picnic. The site where you can view the fireworks is usually a grassy area along the river or a large park or nearby streets blocked off to traffic.

There are food stalls selling yakisoba noodles, corn, canned beverages, and other snacks. The best viewing areas are packed with people. People sit wherever they can find space. The dark-blue sky soon turns black, and the first boom, crackle, and light flash is seen and heard right on schedule. Loud cheering by the crowd ensues.

The fireworks continue for about an hour or so. It's a mixture of small and large fireworks. The small ones may explode in distinct shapes such as a heart, star, or even Mickey Mouse. Then every so often they insert a giant ball of fireworks or a rapid-fire sequence of multiple fireworks which always elicits oohs and ahhs or "Ah kirei!" (That's beautiful!) or "Sugoi!" (Fantastic!).

Sometimes they have a few ground fireworks such as "Niagara Falls" which is a long string suspended several meters above the ground. When it is lit, a row of white sparks rain down on the ground to resemble the famous falls. Or it could be "Mt. Fuji" when the string is in the shape of that famous mountain. The fireworks show climaxes with a prolonged, rapid-fire sequence of many fireworks shot up simultaneously.

Seeing fireworks is a common seasonal ritual in Japan. It's like going to pray at a shrine during New Year's (hatsumode), picnicking under the cherry blossoms (hanami) in spring, and watching the track meet at your kid's school (undokai or Sports Day) in the fall.

In Tokyo, we can enjoy a number of major fireworks displays in July and August. The Sumida River fireworks is the most famous with a long history. It's also the most crowded one. The fireworks are shot from barges on the river. The river is dotted with yakata-bune or little restaurant boats adorned with red paper lanterns. They give their guests a premium view of the fireworks (usually directly overhead).

The fireworks off the beach in Kamakura is also great because you can sit on the sand and feel the cool sea breeze while the fireworks light the sky and reflect off the ocean surface.

When you go to see fireworks, your enjoyment will depend on the day's weather. If there's no wind blowing or if the wind is blowing in the wrong direction (toward where you are), you won't be able to see the fire flowers because of the smoke. It's really frustrating when that happens. "Mienai!!" (Can't see it!) is what you will hear. And if it rains, don't go. The ground will be too wet to sit on, and it's hard to see the fireworks with all those umbrellas.

One of the best things about seeing fireworks in Japan is that you can see a lot of girls wearing the yukata kimono. I always go to photograph them instead of the fireworks.

However, the photographer of this book has pursued an entirely different angle when she goes to photograph fireworks. Her photos are not picture-perfect nor dazzling. It looks more like 50 different views of fireworks. She photographed fireworks from a variety of different and interesting perspectives.

For example, a telephone pole right in the middle of the picture is complemented by fireworks in the background. There are fireworks as seen through the window of a luxury hotel room (with the bed in the foreground). She also saw fireworks from a car on the freeway. You don't see any fireworks as seen from the train or helicopter, but she might be working on that as well.

She's got some good, unconventional shots of fireworks and the crowds. I only wish that she provided captions to reveal the locations of the fireworks. I recognized a few of the places in the book (like the Sumida River), but would like confirmation. They should've published this book in the summer instead of autumn. (Reviewed by Philbert Ono) Reviewed on: 2002-05-19

Kawauchi's translucent photographs have won her many fans among the younger generation. She depicts the fleeting nature of beauty in her pictures, highlighting the inseparability of the evanescence and cruelty of reality. In AILA, the long-awaited new book, you can enjoy her four-year works capturing moments of life begin. (From publisher Little More)

the eyes, the ears

Photographer Rinko Kawauchi, who has been widening her appeal internationally, is going to make exhibitions here and abroad in 2005, such as Fondation Cartier pour l'art contemporain, Paris, The Photographer's Gallery, London and Kanaz Forest of Creation, Fukui.

This book consists of the photographs taken from usual everyday life, and whispery words put together by Rinko. (From Foil)

From among her photo books so far, I like this one the best. Mainly because I can understand the subject matter: Grandparents and family in your rural hometown. My Japanese grandmother in her rural home, while she was still alive, was a frequent target of my camera. So I can heartily identify with the photos in this book.

The pictures in the book were taken during 1992 to 2005. They center on her grandparents living in a small town in Shiga Prefecture. And as implied by the cover photo, "Cui Cui" actually means "Eat Eat" in Japanese. Pictures of food are recurrent in the book. The overall tone of the book is quite poignant, with her grandfather passing away, leaving her grandmother living alone in Shiga. (Her parents now live in Osaka.) But there's a happy ending with pictures of a newborn child, her nephew born soon after her grandfather's passing in 2004.

The pictures really give a good glimpse into life in rural Japan with a typical family. You see family gatherings, grave visits, a wedding, grocery shopping, outdoor strolls, and especially the food they eat.

She has an older brother whose marriage and child are seen in the book, and a younger brother living alone in Tokyo like her. The pictures are not captioned, but she gives a summary at the end of the book, explaining her family situation. The book is really her testimonial to her loving family and upbringing. Unfortiunately, there's only a French translation, no English. (Reviewed by Philbert Ono)