Japanese-American and Nikkei Museums in Japan

Japan has a number of museums and exhibits dedicated or related to the Japanese emigration to Hawai'i, North America, and South America. They are listed below. Most of the museums have an interesting story behind them. I've visited most of them. If there is a museum or exhibit you know about and should also be listed here, please contact me with the info.

Japan's largest museum dedicated to the nikkei experience. A must-visit museum for all nikkei in Japan. There are permanent exhibitions explaining the immigration to Hawai'i, continental USA, and other countries especially South America. There are also changing or special exhibitions so it's worth visiting more than once. One recent special exhibition held from Dec. 2016 to Feb 2017 was titled, "Hawai’i's Nikkeijin Matsuri—Oshogatsu and Bon Dance" (photos here).

Besides exhibition rooms, the museum has a reference library (closed on Sun.) with a collection of 20,000 books and materials about Japan's immigration. It even has kami-shibai (picture card stories). You can browse through recent Japanese novels such as "Japanese-Americans 99 Years of Love." The museum also has a restaurant with an outdoor terrace (open 11:30 am - 1:30 pm, 5:30 pm - 9 pm). The museum is operated by the Japan International Cooperation Agency (JICA) which is Japan's version of the Peace Corps. Unfortunately, their Web site is not in English (except for the map and directions), but there is a pamphlet in English which you can download here.

In the 19th century, Ikaho Spa was a popular summer retreat among the political and social elite. One of them was Robert Walker Irwin who spent his summers at his villa in Ikaho with his Japanese wife and children. Irwin was an American businessman from Philadelphia, PA who was later appointed by Hawai'i's King Kalakaua as the Hawaiian Minister to Japan. He negotiated for and oversaw the kan'yaku Japanese immigration to Hawaii during 1885-1894.

On Oct. 1, 1985, to mark the 100th anniversary of the Kanyaku Imin, the town of Ikaho in Gunma Prefecture designated Irwin's former summer residence as one of the town's Historical Places (伊香保町指定史跡) and proceeded to preserve the remaining part of the residence which was moved near the bottom of the Stone Steps. In return, Hawaii's Governor George Ariyoshi, a descendant of Japanese immigrants and America's first Japanese-American governor, sent a letter of appreciation to the town and people of Ikaho.

The summer residence or villa (called Hawaiʻi Koshi Bettei ハワイ公使別邸 or Robert W. Irwin Bettei ロバート・W・アルウィン別邸) opened to the public as a history museum of the Irwin family and Japanese immigration to Hawaiʻi (free admission). It was only a small section of the original summer home. In autumn 2013, the home was moved to its current (and original) location slightly up the Stone Steps in place of the Kanzanso inn that was torn down. For the move, the building was disassembled and repairs were made where necessary. The home was then reassembled with new exterior walls, floors, roof, etc.

Directions: Map here. From the Buster Shinjuku bus terminal at JR Shinjuku Station (near South Exit) in Tokyo, there are JR buses to Ikaho, taking 2.5 hours. Get off at the Ikaho Ishidangai stop (伊香保石段街) at the bottom of the Stone Steps. Day trippers can store luggage in the nearby lockers. Irwin's villa is a short distance up the Stone Steps on the right side. 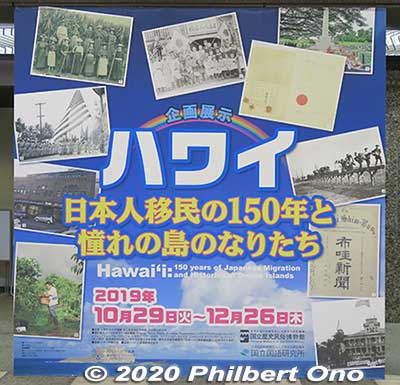 "The Art of Gaman" was an exhibition of art and crafts created by Japanese Americans incarcerated in Japanese internment camps in the US during 1942-46. They used whatever scrap materials they could find to create these very imaginative and intricate works of art. "Gaman" basically means "to endure hardship." The exhibition was already well-known in Japan thanks to the NHK TV program "Close-up Gendai" which introduced it. It drew large crowds in Tokyo.

After touring the US, including the Smithsonian American Art Museum in 2010, "Art of Gaman" toured Japan starting in Tokyo on Nov. 3 to Dec. 9, 2012. The show went on to Fukushima, Sendai, Okinawa, and Hiroshima where it ended in Sept. 2013. The University Art Museum, Tokyo University of the Arts is near Ueno Park in Tokyo.

The exhibition in Tokyo was pretty much the same as the one at the Smithsonian American Art Museum.

Well-known outdoor architectural museum with over 60 Meiji-Period (1868-1912) buildings preserved in a spacious, park-like setting. Meiji Mura was opened in 1965 by two men who wanted to save precious buildings slated for demolition. Most of the buildings have been moved here from all over Japan, but three buildings came from overseas. The three buildings from overseas are related to Japanese immigration:

Other info: Parking available. Pets are not allowed except for seeing-eye dogs. Pets can be kept in unwatched cages provided at the entrance. Baby strollers (200 yen rental) and wheelchairs (free) are available at the entrance. Bicycles, roller skates, etc., are not allowed. If time allows, visiting Inuyama Castle (National Treasure) from Meitetsu Inuyama Station is highly recommended.

In Mihama town on Cape Hinomisaki, there was a small fishing village called Mio. In the late Meiji Period, stories of salmon riches in Canada's Fraser River lured tens of Mio residents to immigrate to Canada every year. After World War II, some immigrants returned home and built Western-style homes. There were so many exotic-looking Western-style homes that Mio village came to be called "America-mura" (American Village).

The Canada Museum is a Western-style building exhibiting the immigrants' life in Canada and eventual internment during the war. Also displayed are items they brought back from Canada like a sewing machine and phonograph. The museum roof has a lookout deck affording a fine panoramic view of the coast and ocean. The museum is in Hinosaki Park in Mio where you can also find related monuments, Hinosaki Lighthouse, and the Hinomisaki Kokuminshuku Lodge (日の岬国民宿舎).

Other info: Info in Japanese

Huge national museum in central Osaka at the former site of Expo '70 in Suita, Osaka. Opened in 1977, the museum (nicknamed "Minpaku") is also a research institution for numerous researchers in ethnology. If you like foreign cultures, you should not miss visiting this museum. It has 255,000 items in its collection and about 12,000 of them are displayed. It is mind-boggling to see the diversity of human cultures. The museum library also has a collection of nikkei-related books.

In 2001, the museum held the memorable From Bento to Mixed Plate: Americans of Japanese Ancestry in Multicultural Hawai'i exhibition which originated in the U.S.

Directions: The closest train station is Banpaku-Kinen-Koen Station on the Osaka Monorail (15-min. walk from the station). From Shin-Osaka Station, take the Kita-Osaka Kyuko subway to Senri Chuo Station (13-min. ride) where you transfer to the Osaka Monorail. Get off at Banpaku-Kinen-Koen Station (6-min. ride). Detailed directions at their English Web page.

Formerly the Kobe Emigration Center (神戸移住センター) opened in 1928 where Japanese emigrants stayed before traveling mainly to South America (especially Brazil) by boat. It later was used as a school for hospital nurses. Today, it is a large, multi-purpose facility that includes exhibition rooms showing Kobe's history of Japanese emigration, especially to South America. Interesting reconstruction of the emigrants' sleeping quarters too. Also, art studios, art gallery spaces, and meeting rooms for cultural exchange (mainly Brazilian). It is also a consultation center for South American residents of Kobe. Operated by the city of Kobe, the present facility opened on June 3, 2009.

The center was used from 1928 to 1971 for emigrants (with a break during World War II) and it is Japan's only surviving building used for sending Japanese emigrants. Within a few months after the center opened, it was visited by Crown Prince Hiro and former Prime Minister Jun'ichiro Koizumi. In Japanese, the museum is called "Kobe-shiritsu Kaigai Iju to Bunka no Koryu Center."

Opened on February 8, 1999, the Museum of Japanese Emigration to Hawaii (Nihon Hawai Imin Shiryokan) is on Yashiro-jima island in the Seto Inland Sea off the city of Yanai (柳井市) in Yamaguchi Prefecture. It is slightly west of Iwakuni along the coast. The museum was converted and restored from a large, two-story, Japanese-style private residence donated by the family of Fukumoto Choemon for the museum. During the first nine years of the Kanyaku immigration program beginning in 1885, almost 4,000 of the island's 70,000 residents left the island to immigrate to Hawai'i.

The entire island is called Suo-Oshima town (current population around 20,000) and does not go by the island's old name of Yashiro-jima. The museum shows a collection of artifacts related to the Japanese immigration to Hawai'i, how the immigrants faced hardship and eventual success, and cultural exchanges between Japan and Hawai'i.

Directions: By shinkansen bullet train, get off at Shin-Iwakuni Station in Yamaguchi Prefecture. Take a train or bus to JR Iwakuni Station and take the Sanyo Line train to Obatake Station (大畠駅) taking about 26 min. From Obatake Station, take a minivan taxi to the museum taking about 18 min. Get off at the Yashiro-bashi bus stop, cross the bridge, then look up and see the Hawai'i and Japanese flags flying over a Japanese-style house which is the museum. The minivan taxi does not run so often from Obatake Station. A regular taxi should cost no more than 2,000 yen to the museum. Google Map link to museum | Japanese map here

Other info: Photography not allowed inside the museum. The island is quite large, the third largest island in the Seto Inland Sea. It is shaped like a goldfish and quite scenic, especially along the northern coast. A bus ride along the coast would be enjoyable. The island also has hotels and other accommodations. The largest settlement is around the bridge connecting the island to the mainland. More Suo-Oshima photos here.

Opened in 1997, the museum claims that it is Japan's first museum dedicated to the Japanese immigration to Hawai'i. It is in a Japanese-style building formerly used as a storehouse (kura). The museum mainly exhibits things brought back to Japan by the immigrants who went to Hawai'i. It also explains the immigrants' lives in Hawai'i and why so many from Hiroshima immigrated there. Unfortunately, the museum is not open to the general public. It is geared for groups of school children visiting by appointment. However, if you call and explain that you are a nikkei from Hawai'i, they might accept you.

The former Nihojima village where the museum is located has many families with ties to Japanese immigrants to Hawai'i. The museum director is Kawasaki Hiroshi, whose father immigrated to Hawai'i and worked as a steam locomotive engineer in the sugar plantations of Hilo, Hawai'i. Mr. Kawasaki has an older brother and four older sisters all born in Hawai'i and are American citizens. He is the only Japanese sibling, being born in Yokohama. During World War II, the family was split between Japan and America. He also had uncles and aunts who immigrated to Hawai'i and lived there permanently.

One of Mr. Kawasaki's uncles became a successful carpenter in Hawai'i who started his own construction company. He sent money back home and had a new Japanese-style house and kura storehouse built, probably preparing for his return to Japan. However, he remained in Hawai'i where his kids were born and the estate went to his nephew Mr. Kawasaki. The large kura storehouse that was built is now the museum. The kura was a symbol of success and Nihojima village once had as many as 160 kura built by hardworking immigrants in Hawai'i and the mainland US who sent money back home.

Hours: By appointment only.

Other info: The museum is not open to the public. Elementary school groups can visit the museum by appointment.

Japan has had a few high-profile TV programs and a few movies about Japanese Americans. However, these programs are for the Japanese audience and the cast always speak perfect Japanese. The main Japanese-American characters are also always played by native Japanese actors/actresses who just cannot speak English (or pidgin English) that well. We also do not see real Japanese-American actors/actresses in these programs so most Japanese Americans in Japan remain unconvinced.

＊ Contributors to this page also include Michael Takashita.