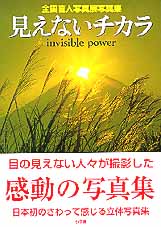 For most of us, going blind is one of our worst fears. Especially for a photographer. After all, how can you take pictures and look at pictures if you're blind?

Ask a blind photographer to answer such questions. Yes, there are blind photographers. How do they do it? Well, imagine how you would take pictures if you were blind. First, your ears would serve as a guide. By listening carefully, you can tell where the subject is and how far away. If you want to photograph a person, take the picture when you hear laughter. Your ears can serve well as a guide to when to take the shot.

For still-life subjects, you can touch the object (flowers, etc.) and decide which angle to photograph it from. If you're waiting for a sunrise, feel the heat of the sun on your skin before taking the picture. You can also discern which direction the sun is in. Besides using your other four senses, a major boon is having a seeing person tell you what's going on and when to take the picture.

And that's how they do it. It's truly amazing how adaptive and strong humans can be to overcome any kind of handicap. The same applies to the blind. In Tokyo, sometimes I see a blind person taking a subway or train. You know how difficult it is even for seeing people to navigate through all those crowds in the train/subway stations? There are pimpled tiles on the ground to guide the blind, but still, the blind are truly awesome to venture out by themselves. It is the "unseen or invisible power." Of course, we all have it, but most of us don't really know how to tap into it.

As for the question of how a blind person can "see" photographs, this book gives the answer. Besides regular color photographs, it includes nine pictures that you can touch and feel. They are embossed images (that smell like rubber), and each one is captioned in Braille. The book claims to be the first photo book in Japan to include such images for the blind. All the pictures are of typical subjects that most amateurs in Japan pursue: Mt. Fuji, cherry blossoms, festivals, flowers, family and friends, children, and even fireworks. You can't help but be impressed by the quality of the photos while knowing that they were all taken by a blind person.

The book says that photography by blind people started with the invention of fully automatic cameras and embossed printing technology. There is a special copying machine (rittai kopii-ki) that can produce an embossed image of the copied photograph.

The photographs in the book come from the best ones that have been shown at the annual blind photographers exhibition held annually in the past 15 years in Tokyo. The common reaction of most visitors to these exhibitions is, "Blind people taking pictures? I don't believe it!" Their disbelief soon turns into admiration, and the common notion that blind people cannot take pictures is totally dispelled. Such is the power of the blind, not only in being able to take pictures, but in also affecting normal seeing people in positive ways.

The National Blind Photographers Exhibition (Zenkoku Mojin Shashin-ten) was first held in 1985 in Tokyo. Over 200 pictures by blind people all over Japan are submitted and a panel of judges select about 60 pictures for the exhibition held every Dec. in Shinjuku, Tokyo. The exhibition displays each photograph in two ways. There's the normal photograph, and then there's an embossed version (made by the special copying machine) of the same picture that the blind can touch and feel with their fingers.

The exhibition is not only about the photographs themselves, but also about the determination and effort by the blind and the loving support of family members. It's about the people behind the camera and about tapping that "power" that lies within (usually dormant for most of us). The exhibition is supported by corporations (like Minolta which developed the special copying machine), organizations, and prominent pro photographers. The honorary chairman of the panel of judges is Prince Mikasa, a relative of the Emperor. Personally, I think it's just fantastic that blind people are able to take pictures and look at them. Having a means of self-expression is so important to all humans. (Reviewed by Philbert Ono)