A photographer who was a sake brewer in Onjuku, Chiba Prefecture. 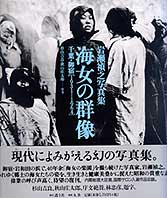 "Ama" literally means "sea woman" in Japanese. These sea women dived deep in the ocean (without scuba gear) from small boats to harvest shellfish and other seafood. (And sometimes pearl oysters, especially at Ise-Shima in Mie.)

The book's setting is a coastal town named Onjuku in Chiba Prefecture. Most of the photos were taken in the 1940s and '50s. The most striking quality about these women is that they are usually topless.

They are topless because it "feels good." You can imagine that bare skin feels much better than wearing clothing wet from sea water. And there were hardly any men around (except the trusted photographer), so there was no need to feel shame. Of course, those days are now long gone.

Because of these topless ama divers, Onjuku became quite famous among photographers from the city (Tokyo). They often came to this otherwise quiet beach to ogle and photograph these women. And the book's photographer arranged photo shoots for them. The youngest and prettiest ama divers were hired to pose for the amateur photographers. The book includes a few photos taken during these photo sessions where the "models" were obviously posed.

Most of the pictures in the book show candid shots of the group-oriented ama divers on shore eating lunch, warming up around a fire, hauling a boat to shore, cleaning up, or taking care of the children (breastfeeding). They are mostly topless, even the young and cute ones. You can tell which girls the photographer liked best. In those days, there were over 200 ama divers in Onjuku.

Almost all the pictures were taken on shore. It looks like he never actually rode on a boat with the divers. And of course, there are no underwater shots of the divers diving.

Most of the women got into this line of work while young, around age 15, following the footsteps of their mothers. It takes two years to be trained as a skilled ama diver. The divers often made more money than their husbands.

A typical diving day started at 9 am. Twenty to thirty women would board each boat steered by a skilled, elderly man. They went into the water three times during the day. Each time they went into the water, they dove about 40 times before going back into the boat. Each dive lasted about 40 to 60 sec., and they dove between 6 and 12 meters. How deep they dove depended on their age. A diver in her 30s went down about 9 meters, and older women in their 40s and 50s could go as deep as 12 meters.

They wore thin underclothing and hip-hugging shorts which they sewed to fit their body perfectly. (They did not dive topless.) The face mask was custom-made to fit the woman's face and had to be remade after it wore out after a few years. To prevent the face mask from fogging up, they spread the juice of mugwort leaves over the glass inside and out.

Other standard tools included knives to cut away the abalone, 12-15 kg weights to help them dive faster in the water, a net bag (tied around their waist) to hold the harvest, and a wooden cask that floated on the water to hold seaweed and a few knives.

At around noon, they would go back to shore for a one-hour lunch break. Having lunch together and sharing each other's food was something everyone enjoyed the most. Then they went back out and dove again before returning by 4 pm or so.

During the four-month diving season from May to Sept., they could dive only about 20 days total. Depending on the weather and surf conditions, the head ama diver would decide whether they would dive or not that day.

Needless to say, it was hard and dangerous work. Holding your breath and diving that deep makes your head spin since the oxygen does not reach the brain. A big gasp for air is what you heard each time she came back up.

Young and old, the women all look vivacious and healthy. All that physical work made them lose weight, but the ocean does have medicinal properties. After all, the chemical composition of the ocean is very similar to human blood.

Born in 1904 (deceased in 2001), the photographer was a sake brewer in Onjuku. He was an avid amateur shutterbug who tended to ignore his sake-brewing duties and went after the ama divers instead.

Since most of the original negatives and prints were lost, most of the photos were scanned from a previously published photo book. So the image quality of the photos is not pristine. Somewhat on the grainy side due to the film technology at the time.

But nevertheless, this is a wonderful record of this group of women who were a bygone institution. The book gives you a much better picture of what these women were really like. I mean, you've seen them fleetingly before on tourist postcards and stuff, but this book shows what they really were--very hardworking, skilled, and strong women, and not just some topless babes on the beach.

There is some Japanese text at the end of book. It explains the history and background of the ama divers and how they worked. There is also an interesting interview with a few of divers (now retired). (Reviewed by Philbert Ono)