Born to Japanese parents. Moved to Tokyo at age 12. Worked as a securities analyst for 5 years at Yamaichi Securities. Then became a photographer of ethnic minorities, mountain folk, and pigs in Yunnan, China from 1991. Japanese and US national, fluent in Japanese, English and Chinese. First solo female recipient of the prestigious Taiyo Award in 1997. 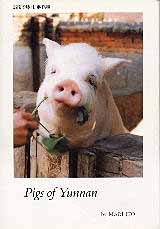 Normally I don't review and sell photo books like this one. However, the photographer happens to be a friend of mine, someone whom I'm sure will be able to return the favor someday. So here it is, a book of pig photos.

Mari was born in Rhode Island, USA and grew up there for the first 12 years of her life before suddenly moving to Tokyo with her Japanese parents. She is a dual national (Japanese and American), and her English is native level. But by now, her Japanese might be a little better since she has lived in Japan longer. Anyway, it's always good to meet a Japanese photographer who can speak English like a native. She also speaks Chinese. There are obviously many advantages that come with being able to speak more than one language.

For the last 10 years, she has been traveling to Yunnan Province in China to photograph the villages and people there. Yunnan is in southern China, facing Myanmar, Laos and Vietnam. In the north, there are high snow-capped mountains that lead to Tibet. In the south, there are sub-tropical virgin forests where wild elephants and tigers still live. Kunming, the capital of Yunnan, is called "Spring City" because the weather is like springtime all year round. Among the 55 ethnic minorities in China, about half live in Yunnan as they continue their traditions and culture. From Tokyo, there are direct flights to Kunming via Japan Air System.

Pig in Yi VillageIn Yunnan, Mari feels free as a bird. Free from the rigid and conformist society of Japan. She goes there three or four times a year, spending a few weeks each time. It's her break from life in Japan as well as a time to take pictures of a rapidly changing place in China.

From about five years ago, she started taking pictures of the pigs roaming freely in the villages of Yunnan. They roam all over the place--in the middle of roads, in the house, in the backyard, in the river, and even near the meat (pork) market. Mari soon identified with and envied the carefree nature of the pigs and started taking pictures of them.

In 1997, she submitted her pig pictures for a major photography award called the Taiyo Award (named after Taiyo magazine and sponsored by publisher Heibonsha) and won the award out of some 300+ applicants. One of the judges was Nobuyoshi Araki who really liked her pictures. (Death was the ultimate fate of the pigs, and "death" is one of Araki's pet themes along with sex.) She became the first female solo recipient of the award.

The award changed her life. It brought her much publicity in mainstream newspapers and magazines (especially the one for pig farmers in Japan). She even once hosted a TV program on Yunnan for NHK (Japan's public TV station). She has a thick scrapbook of all the newspaper and magazine clippings that featured her or her work. It's amazing to see how far she has gone with her pig pictures. And it is nice to see how an award can really boost your career.

In 1998, the book's publisher offered to publish her photos in a book. It was a lucky break since most Japanese photo books need a financial sponsor or the photographer has to pay for much of the publishing cost. But this was not the case with this book. The publisher sponsored the book.

She still receives invitations to show slides or speak about Yunnan (with or without the pigs). Talk about how pigs can boost and improve your life! Before I met her, I remember seeing her pig photos in a major camera magazine. They actually published these pig photos as serious photography?? And she even won a major award for it?? Not only that, she got a pig photo book to boot??

I'm not questioning her photographic intention and dedication. It's just that the subject matter is, well, funny. After all, pigs are the most laughed-at and mocked animal in the world. When you see a pig in a movie (like Babe) or in a cartoon (Porky Pig) or in a TV series (like Green Acres), it always serves as an element of humor. Even newspapers sometimes carry a picture of pigs to make their readers chuckle. It's a fact that pigs are a laughable subject.

There has always been a love-hate relationship between humans and pigs. We love them for making us laugh, but also tease them as dirty, fat, and disgusting. We call any person with such traits "a pig." We have spiteful but common expressions such as "She/He looks like a pig," "You eat like a pig," "You're fat like a pig," "Your room is like a pig sty," etc., etc. Pigs serve as the butt of many jokes and derogatory expressions. But at the same time, "piggy" is an affectionate label (such as Miss Piggy of Sesame Street and the Three Little Pigs) and of course we have hot dogs and ham.

To be fair, I have to mention that Mari prefers to photograph and show the ethnic minorities of Yunnan rather than the pigs. However, the media and galleries in Japan are more interested in her pig photos than in her portraits of Yunnan natives.

Although the main subject of this book is pigs, it shows more than that. It also introduces the different tribes and villages in Yunnan. The pictures of the people and their way of life give us a glimpse of daily life there. The book introduces seven ethnic minorities and each section is narrated by Mari (in Japanese only) in a diary-like fashion. She recounts her encounters with the local people there. She travels with a local guide who also works as her interpreter and assistant. Urban Chinese living in the big cities of China regard Yunnan as a hick and poor backwater, a place they don't want to consider as part of China. They shun her photos of Yunnan and feel offended by her showing "that part" of China.

Among the more memorable shots in the book include a boy dressed as a monk in orange robes while posed on a mountain bicycle, plastic bottles of pig's blood on sale, and a fat pig scrounging for food on the ground near the meat market where bloody pig carcasses hang.

Mari is also taking pictures of crows in Tokyo. Crows, of course, are the least loved bird in Japan. They eat crops, they tear open garbage bags and eat the contents, and they are noisy. They even attack humans who come near their nest. Most people consider them to be ugly and wicked-looking. Again, it seems that Mari is attracted to the unattractive. We have to remember the old proverb: "There are no uninteresting things. Only uninterested people." But if she comes out with a photo book of crows, I won't review it here. These pigs are enough for me. (Reviewed by Philbert Ono)

Wide variety of photos of Yunnan, China centering on people and wandering pigs.

She's still at it: Traveling to Yunnan, China a few times a year to get away from life in Japan and to photograph the people, places, and pigs there. She's been doing it since 1991. In Japan, Yunnan has recently become quite famous and popular as a travel destination. There has been a number of books and magazine articles about Yunnan lately. Mari is now riding this wave, but she is not alone. There are other Japanese photographers who are also into Yunnan.

It's appropriate for a major travel agency (Japan Travel Bureau or JTB) to publish her second book on Yunnan. Although this is mainly a photo essay about her travel experiences in Yunnan, it also serves as a good visual introduction to Yunnan for the Japanese. There is a wide variety of photos, and not just pigs like her first photo book (see review below). She was finally able to publish more of her people pictures.

You see almost everything that a good travel book would show. People's faces, costumes and clothing, food, people at work and at play, children, landscape, and everyday scenes. What makes Yunnan interesting is that it is home to many ethnic minorities. It is also still a backwater province, but developing and changing at a fast pace.

She's got a good thing going. Doing what she likes and receiving corporate support for it. At the same time, she is serving as a grass-roots, goodwill ambassador to Yunnan and helping to promote tourism there. It's a win-win situation for her and Yunnan.