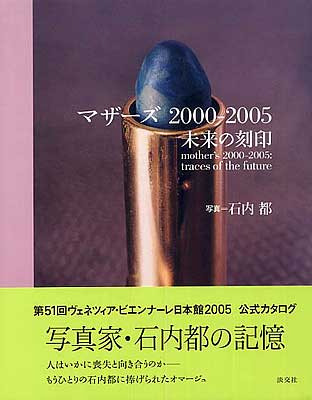 Woman photographer who grew up in Yokosuka, Kanagawa Pref. from 1953 to 1966.

Entered Tama Art Univ. but dropped out in 1970. Works include "Yokosuka Story," which was about the US Naval Base in that city, and "Sawaru Chromosome XY," a photo book on male anatomy, published in 1995.

In 2005 at the Venice Art Biennale, featured solo photographer at the Japan Pavilion with an exhibition titled, "mother's 2000-2005--traces of the future." Photos of her deceased mother's personal belongings. (Biennale photos here)

The last time a Japanese photographer held a solo show at the Venice Biennale's Japan Pavilion was in 1976 with Kishin Shinoyama. Almost 30 years later, we finally had a photographer as Japan's featured artist at the 2005 Venice Biennale. She is Miyako Ishiuchi. See photos of the exhibition here.

Her exhibition was titled: mother's 2000-2005--traces of the future. It was a series of 38 photos of her deceased mother's personal effects--clothing, lipstick, kimono, etc. The exhibition also included a few of her earlier works from Yokosuka Story, Apartment, and Endless Night.

This book is the official catalog of that exhibition in Venice, Italy.

Finally, something for the ladies. This book is by an award-winning female photographer from Yokosuka, Kanagawa. She photographed several men, both Japanese and non-Japanese, and young and middle-aged.

They include fellow photographers Hajime Sawatari and Masahisa Fukase. You see closeups of various parts like the nipple, buttocks, fingers, chest hair, pubic hair (but no genitals), etc. A lot of skin and texture in B/W.