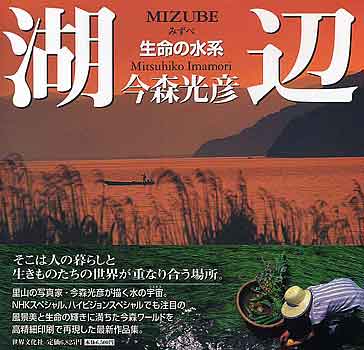 A native of Shiga Prefecture, which is home to Japan's largest lake, Lake Biwa, the photographer has been photographing this lake and insects for over 25 years. He has published numerous books over the years and this is one of his major works.

The title of the book, Mizube, means water's edge. Many of the pictures are of the lake shore and edge where the nature of the lake and land (and man) converge. Lake Biwa is not just a container of water. The water actually circulates due to the temperature difference. It is actually like a living organism (mother lake) itself at the center of a network of many river systems connected to the lake. The entire ecosystem supports much plant and wildlife.

The lake also supplies drinking water to Kyoto and Osaka. It is vitally important to both nature and man. One key word is "satoyama" which literally means human community and mountain. It refers to how man and nature in and around the lake depend on and respect each other in mutual co-existence. This is another theme that Imamori focuses on.