One of Japan's most internationally recognized, fine-art photographer. Professor of Photography at Tokyo Institute of Polytechnics since 1975. Director of the Kiyosato Museum of Photographic Arts, Yamanashi Pref. Vice-President of Japan Professional Photographers' Society (JPS).

Career Freelance since 1954. Based in Tokyo.

Best known for photographs of legendary and notorious novelist MISHIMA Yukio in Barakei (Ordeal of Roses). Mishima saw Hosoe's photographs of HIJIKATA Tatsumi, and later requested that Hosoe take his portrait for a book cover. Hosoe photographed Mishima over four sessions in 1961-62.

First photo book was Man and Woman, published by CamerArt in 1961. He concluded that film grain in photographs was essential. The photos in that book were indeed grainy, but strong. Also noted for nudes and surrealistic, solarized prints.

Proficient in English since high school, he has taught many workshops in the U.S. Highly active in photographers' organizations, such as the Japan Professional Photographers Society (JPS), for the betterment and promotion of photography in Japan. 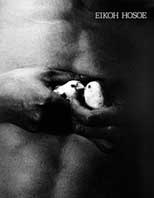 If you are doing research on Eikoh Hosoe, one of Japan's most recognized fine-art photographers, this is the book to get. It pretty much has everything you would want to know about him, his career, and his creative works. The book is packed with photos and information: A detailed biography of his illustrious life (including a baby photo), list of many solo and group exhibitions, commentaries about Hosoe by various people, and a marvelous B/W catalog of over 200 photos representing a 50-year career starting in 1950 at age 17.

This is actually the exhibition catalog of Hosoe's retrospective photo exhibition first held from July 20 to Aug. 20, 2000 at the Yamagata Museum of Art, not far from Hosoe's birthplace of Yonezawa in Yamagata Pref.

The exhibition then traveled to the Ashikaga Museum of Art (in Tochigi Pref.) for Aug.-Oct. and to The Shoto Museum of Art in Shibuya, Tokyo for Dec. 2000 to Jan. 2001.

In fall 2001, the show went to the Akita Senshu Museum of Art in Akita Pref. And in 2003, the final stop will be the Kiyosato Museum of Photographic Arts in Yamanashi Pref. for a 5-month run from April to Sept. Hosoe happens to be the museum's director.

I saw the exhibition at the Shoto Museum of Art and it was very impressive. Like the exhibition, the photos in the book are divided into over 10 sections in chronological order. The first section shows his early works from the 1950s. It is followed by the "Man and Woman" series shot in 1959-60. This was a milestone work with mostly high-contrast, grainy B/W pictures showing a man and woman at odds. The photos were published by Camerart in his first photo book in 1961. The next section is another milestone and masterpiece work called "Ordeal by Roses" featuring novelist Yukio Mishima depicted in striking and surreal images. This is Hosoe's most famous work. Mishima liked Hosoe's work in "Man and Woman" and therefore asked Hosoe to be the photographer. (Sample photos at Kyodo News.)

Another of my favorites is the "Luna Rossa" series. This is solarized outdoor nudes, created during 1992-1996, and later made into a book (see review below).

The other photo series are titled "Kimono," "Kamaitachi," "Embrace," "Simmon: A Private Landscape," "My Artist Friends," "The Cosmos of Gaudi," "Naked School: Nude Workshop," "Kazuo Ohno Series, 1960-1997," and "People Concerned with the Works."

When you read his detailed biography (unfortunately no English translation), it is interesting to see how his career developed. He had humble beginnings like most of us. But when his creative talent became obvious, his career got on the fast track.

At age 15, he bought his first camera. In high school, he joined the English language club and photo club. He excelled at English and became the English club president and also won the Tokyo high school English speech contest. He even commuted every day to a US military housing area in Nerima-ku to study English. He photographed the children of US military personnel there and it became one of his early photographic works.

He also joined amateur camera clubs and met their advisors and learned more about photography. He soon started entering photo contests. All this while still in high school. Studying English and photography. These two skills would later prove to be a terrific combination and a life-long asset for him.

In 1951 at age 18, he won the top prize for the 1st Fuji Photo Contest. This convinced him to pursue photography as a career which took off soon after he graduated from college. He eventually met all the right people and lived and worked during Japan's golden years after the war, during high economic growth. He also belonged to a generation of artists who were among the best there ever was in Japan. Besides Yukio Mishima, there were Shomei Tomatsu, Ikko Narahara, Tadanori Yokoo, Nobuyoshi Araki, Masahisa Fukase, etc.

Japanese photographers talented in both English and photography like Hosoe are extremely rare. So rare that I would put Hosoe sensei in a class all by himself. While reaping much international recognition, he must have felt a deep sense of personal satisfaction with his early efforts to master English. It was worth it. It also enabled him to expand the breadth and scope of his career. He taught numerous photo workshops overseas.

Today, at age 69, he is still a very prominent and active member of Japan's photographic and artistic community. He is a college professor, photo museum director, and vice president of Japan's largest pro photographers' association. (Reviewed by Philbert Ono) 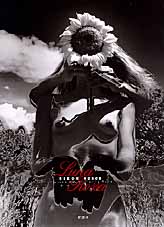 Eikoh Hosoe is one of Japan's better known photographers internationally and one of the few who can communicate in English well enough to teach photography workshops in the United States. He has been one of the prime movers and shapers of Japan's art photography world during the past few decades. He is an artist, professor, director of a photo museum, and key member of prominent photographers associations in Japan. He first made a name for himself in the 1960s, especially with compelling and fantasy portraits of novelist Yukio Mishima (who later committed a sensational suicide by harakiri) titled "Barakei" (Ordeal of the Roses).

It's been a great while since we last saw an original photo book from Hosoe. It's delightful to see this photo book from him. I recognized the cover photo instantly since I had seen it at one of his photo exhibitions some years ago. Hosoe's photographic subjects centers on people, and the nude has always been an important theme for him. In Luna Rossa (Red Moon, a metaphor for the darkroom's red light bulb), his subjects were students at his photo workshops in the US. The models come from a wide variety of occupations and backgrounds.

The photos were taken from 1990 to 1996 in the summer when he taught his photo workshops at art institutions in Anchorage, Alaska (Univ. of Alaska at Anchorage); Snowmass, Colorado (Anderson Farm Art Center); and New York (The Center for Photography at Woodstock and Long Island University). His workshop theme was "Nudes in the Natural Environment." Many of the portraits show the subjects (male and female) praying or meditating outdoors while nude. Hosoe states that the outdoor locations were very conductive for praying and meditating, and most of the locations were indeed held sacred by people long ago.

All the photos were solarized in the darkroom. Actually, three darkroom techniques were employed: Solarization (in the style of Man Ray's Rayograph), photograms (in the style of Moholy Nagy), and photo sketching (in the style of Japanese photographer Ei-Q). Although solarization is the dominant technique, you sometimes see a small part of the photograph that looks normal. It was created by using an object (as for a photogram) to cover an area during the solarization process. The resulting whitish area in the photograph is a very nice contrast with the surrounding darkish, solarization effect. (For example, in the cover shot, the sunflower was covered from solarization and looks normal. The sunflower is being held by a person standing behind the woman in front.)) The artful photographs are the result of a lot of delicate darkroom work. It makes Hosoe an artist behind the camera as well as under the darkroom light.

When you think about Hosoe's international prominence and English proficiency, it's frustrating to see no English translation of his preface and notes and the essay by photo critic Carole Naggar. The book is even dedicated to non-Japanese (and apparently English-speaking) friends. English is provided only for the titles, locations, and dates of the photographs. I can only guess that the extra pages would exceed the budget. Or perhaps an English version of the book will come out later.

Also, the book is quite thin and contains only 23 photos. It should have been a larger book with many more photos. After all, it represents a major body of work produced over seven years. But then, the cost may have prohibited it. Unfortunately, art photography books are always difficult to finance due to low-volume sales. In any case, it's good to see this work in book form. (Reviewed by Philbert Ono)