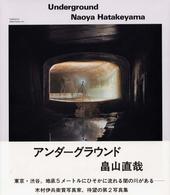 Hatakeyama has found fine art in Tokyo's basement (sewer?). "Cimmerian Darkness and Stygian Gloom" is the secondary title. This book won him the Mainichi Art Award in 2000.

There can be beauty and art any where, even at the yucky underside of Tokyo where Hatakeyama ventured amid rats, bats, insects, mold-covered dung, and cold, mucky water. He was only 5 meters below the bustling streets of Shibuya where he lives.

The first several photos show what looks like shallow underground rivers in a concrete corridor. It is pitch black except for the flash he used. Then the pictures get really artistic with fantastic patterns and a rainbow of colors of what looks like mold or water or waste or whatever. The photos are not captioned so you can't tell what it is exactly. It's amazing to see the beauty he encountered in such a place. He also includes a few shots of rats, bats, and mosquitoes to give us some context.

Fine-art photos of limestone quarries, lime works, and cement works in Japan. This book won the photographer the 22nd Kimura Ihei Award in 1997.

This book has been reissued in Aug. 2002 by a different publisher (the original publisher, Synergy Inc., went bankrupt). It's now a hardcover book.

Status: Out of print

Limestone is one of the few natural resources in which Japan is totally self-sufficient. Japan is in fact a land of limestone. Limestone is a sedimentary rock consisting mainly of calcium carbonate which can be formed from the skeletons of marine microorganisms and coral. It is an essential resource because it is used to make cement, roads (asphalt), iron, glass, plastic, and even medicine. Whole cities are based on this limestone. It's the origin or base material of cities. This is where the photographer's fascination with limestone lies.

Some 200 million tons of limestone are taken every year from all around Japan, scarring or slicing off the tops of countless hills and mountains. If you take a train ride into the countryside, you may see a cement plant operating near a scarred mountain. Japan is actually building its cities at the cost of its mountains.

The book shows color pictures photographed between 1986 and 1994 at 30 sites from Hokkaido to Okinawa. They include massive factory buildings with corrugated walls amid a maze of large pipes and conveyor belts; smokestacks; piles of limestone, cement, or aggregate; quarry landscapes; hills that have been cut away; and geological formations.

A few times he was required not to mention the location of the quarry or works he was permitted to photograph. So there are no place names nor captions provided for any of the photos. The photos do not criticize or praise the limestone industry. The photographer has remained neutral and the pictures are not about man destroying the environment (although there are pictures which show it). The photographer (born in 1958 in Iwate Pref.) received excellent access to the facilities and was usually escorted by workers. The book also has an essay written by the photographer along with a good English translation. (Reviewed by Philbert Ono) Reviewed on: 2001.05.21