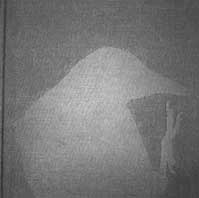 Former wife Yoko was a major subject until 1976 when they got divorced after 12 years of marriage. He then returned to Hokkaido and began a series on crows which have a strong negative and dark image in Japan. The stark photos reflected his depressed mood in the wake of his divorce. His ravens have become his most acclaimed and exhibited work.

In 1992, he suffered a fall on a staircase in a bar in Shinjuku, Tokyo and has laid in a coma ever since.

The most beautiful book of crows you'll ever see. One of Japan's classic photo books.

Impressions: This is his original and classic photo book of crows. The copy I am reviewing cost 57,000 yen at Yahoo! Japan Auctions which I successfully acquired for a customer in the US during frenzied bidding a few minutes before the auction ended. It's in excellent condition, and I must say this is one book they ought to publish again.

The book is square, with a black cloth cover featuring a recessed silhouette of a crow. The book's appearance itself (when you take it out of the slipcase) cleverly symbolizes the black color and darkness of crows. Open the book, and you first see the photograph that was used for the crow's silhouette on the book cover.

The book then proceeds to show black crows and sometimes large flocks of them at night. Their eyes show up as dots of light as they reflect the camera's flash, similar to a cat's eyes.

Gradually it becomes morning when people are commuting to work or school in snowy Hokkaido. During the day, the black crows mix with the white snow. See crow footprints in the snow, then a dead crow sprawled on the snow. Next photo, a closeup of a fat cat's face over the snowy spot where the dead crow was consumed.

Then the most puzzling image of all: A nude, plump, middle-aged woman lying on her side on a bed. She's a masseuse. If anything, she's a welcome visual relief. The book continues with crows perched on a torii, power lines, or a tree. Or they fly in the dark, ominous sky. It is cold, with snow ever present. Sometimes there are huge flocks of them, enough to remind you of Hitchock's "The Birds." If we in Tokyo ever saw that many flying in the sky, it would cause a major panic.

Soon it's evening, and people are starting to come home from work or school under the watchful eyes of a crow or two perched on the power lines. The book then shows ocean scenes--seagulls and boats and even the black underside of a jet plane flying overhead. A few of the shots look like what the crow sees as it flies across the channel from Hokkaido to mainland Japan.

Looks like he left Hokkaido to reach the big city, where, of course, crows thrive in large numbers. The third to the last photo shows a man sitting drunkardly in a large park with cherry blossoms in full bloom. He is all alone in the early morning amid immense garbage on the ground left by cherry blossom picnickers. The final photo is the back view of a single vagrant walking on a bustling city street in broad daylight.

The photos have no captions. Fukase's ravens have been explained by most critics as a manifestation of his soltitude or loneliness. The photographs are certainly gloomy, but they are also beautiful at the same time. The photos don't glorify these despised birds, but they do remind me that as living creatures, these highly intelligent birds are wondrous.

I find it difficult to associate ravens with loneliness since they don't look lonely (especially when flying in huge flocks). Crows are very social (among themselves), I hear them talking to each all the time. I still don't like crows even after seeing this book, but I continue to respect them as fellow creatures of this Earth. (Reviewed by Philbert Ono.)