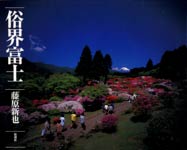 FUJIWARA Shin'ya 藤原 新也 (1944.3.4- ) Fukuoka Pref. Attended Tokyo Geijutsu Univ., later dropped out. Traveled around Asia and other countries for 13 years from 1968. Before embarking, he struck up a conversation with an assistant editor at Asahi Shimbun newspaper who gave him some travel money and 30 rolls of film. Worked as a writer upon returning to Japan. Has published numerous books.