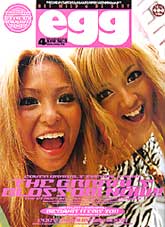 Operating under a new publisher from July 2000, egg magazine retains the same format and look as the last issue published by Million Publishing, the magazine's original publisher. As you can see on the Aug. 2000 issue's cover, it says, "2nd Coming! Good 2 See U Again!!"

This magazine has changed its format since the last time it was reviewed here (see below). It's now more of a teen fashion magazine with amateur high school girls dressed in casual fashion, miniskirts, or bikinis (in summer) adorned with various accessories. There are only about 6 pages (out of over 100) devoted to showing the photographs submitted by high school girls. That's sad. This magazine used to center on publishing the photographs and photo stickers submitted by school girls. It was a major forum for their photographic expression. But not any more. Either there are fewer girls submitting their photos (highly unlikely) or the magazine is trying to make more money by becoming a fashion catalog instead.

Not only that, all the girls featured in the magazine look the same. They all have brown or blondish hair and dark tans. They all wear the same colorful and flowery clothes. They are all smiling and clowning around and posed in the same way. Some of the photos are zany, but you may get bored after the novelty wears off.

Ironically, these girls dye their hair and go to tanning salons to look different, but end up looking the same as everyone else. Hardly any variety at all. Come on egg, show us more variety (don't forget that white skin is beautiful too) and publish more photos from these girls. 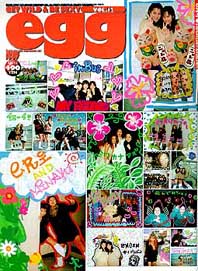 Anybody following Japan's photography scene cannot ignore the subculture created and sustained by Japanese high school girls (and the overblown media). Photography has become an integral part of the lives of Japanese high school girls. First there's the ubiquitous Print Club photo stickers (read about it here), then there's the single-use camera which has become standard equipment in the handbags of many high school girls. And now we have graffiti photos. These are photographs marked with graffiti with permanent-ink pens of all colors thicknesses. When you were a kid, remember how you used to draw a mustache on a picture of someone's face? Well, graffiti photos are an extension of that. Drawing on photographs has become a new, colorful art among high school girls. The graffiti enhances the photo diary quality of the photos.

They draw anything on the photos. It can be text, captions, lewd remarks, flowers, tears rolling down the cheeks, or fake eyelashes. They can be quite creative and funny. A few samples can be seen on the cover of the magazine (June 1997 issue) shown here.

Egg magazine first came out in Aug. 1995 as a bimonthly men's magazine. It featured young, cute girls from TV and the street. The magazine's catch phrase was "Hyper Idol Station." It wasn't very successful and the magazine was on the brink of failure until the Nov. 1996 issue when the magazine's focus shifted to street fashion for young girls. This put the magazine on the right track as the circulation topped 300,000. It became a monthly publication from May 1997 when it further defined itself as a street magazine for young girls (mostly high schoolers), with heavy emphasis on readership participation to publish their photos, writings, etc. It also changed its catch phrase to "Get Wild and Be Sexy."

The magazine itself has already spawned a few copycat publications. But egg is the original venue for high school girls to publish their graffiti photos, show their current fashions, Print Club stickers, essays, opinions, etc., etc. It seems each issue features hundreds of high school girls. If you want to see what today's Japanese high school girls look like and what they are doing and thinking, look at this magazine. Even if you can't read the Japanese text, the pictures are interesting enough. The magazine is now well-known among high schoolers. It really does reflect the current times for this segment of the population. Anthropologists 50 years from now will find the magazine invaluable to research Japan's high school subculture of today. (Reviewed by Philbert Ono)