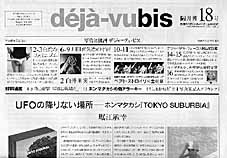 This publication started about three years ago after the demise of its predecessor, deja-vu magazine (see second image above). The original deja-vu magazine (back issues still sold at certain bookstores) was a quarterly and one of the slickest and best-quality magazines around. It had great pictorials and critiques written in Japanese and translated into English. However, it had a steep price of 2,800 yen and apparently it didn't sell well. When it folded, there was an announcement that it would be resurrected at a later date.

That resurrection took the form of deja-vubis. It was a dramatic change and a huge step down from the original magazine. The new publication was like a newspaper with all B/W pages. No English translations either. Very low-cost and bare-bones, so much so that the 500 yen price is probably too much for such a publication. But it's far cheaper than the original magazine. It's an important publication because it's one of a kind and a forum for photo critiques is necessary.

But I must admit that it's hard to be enthusiastic about buying such a plain publication. And you know how art/photo critics write right? They seldom write for the layman. They try to sound too academic or scholarly, and it's difficult to understand what they are trying to say. These critics and commentators should write clearly and concisely so that even the layman can understand. (Reviewed by Philbert Ono)