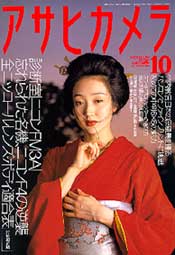 Along with Nippon Camera magazine, Asahi Camera magazine is one of Japan's most famous and widely-available camera magazine. The monthly is geared for the masses and you can find copies in almost any bookstore in Japan. It is thick, slick, and heavy, with almost 400 glossy pages. As far as printing quality, scope, and information volume are concerned, it cannot be compared to any photo magazine outside Japan. Even Popular Photography magazine pales in comparison with Asahi Camera. Although everything is in Japanese, you can at least enjoy looking at the pictures. The pictorials have English titles (but the captions are in Japanese only) and the photographer's name is in English.

Asahi Camera marked its 70th anniversary with the recent April 1996 issue. The magazine has been published monthly ever since April 1926 (except during the war years). The magazine was founded by an amatuer camera club called Zen-Nihon Shashin Renmei (All-Japan Photography Federation) under the guidance of Asahi Shimbun Newspapers. (Today, this camera club is a huge nationwide organization.) Around that time, photography started to spread among the masses with the Vest Pocket Kodak camera. Amateur photo contests were held and became popular. Thus, one of Asahi Camera magazine's main purpose was to hold photo contests. The first issue contained a photo contest section, pictorials by pro photographers, and mechanism-related (technical) articles. These three major features still form the backbone of the magazine. The magazine has won major awards and even started its own with the prestigious Kimura Ihei Award. Kimura Ihei was a key staff member of the magazine upon its revival after the war.

Over the years, the magazine has modified its contents to reflect or respond to the times. Today, if you look at the Contents of the magazine, you will find a dizzying plethora of pictorials, articles, series, and topics including the Internet and digital photography. They are categorized as follows (as of Nov. 2001):

The photos or photo essays of several famous or almost-famous Japanese photographers are featured. Several pages are devoted to each photographer. An interview with one of the photographers is also included.

Various articles about equipment and technique.

Several serial articles like photography Q&A, commentary on photos published in other magazines or in ads, and photo history.

This a major part of the magazine. The winning photos of the magazine's monthly photo contest is published in this large section of around 34 pages. There are categories for black-and-white prints, black-and-white photo series (kumi shashin), beginner's ("First Step") snapshots, color prints, and color transparencies. Readers can enter the monthly contest by sending their photos to the magazine. Prize money ranges from 20,000 yen for first place to 5,000 yen for 5th place (in all categories). Multiple winners are chosen for 2nd to 5th place. People with Honorable Mention get their names listed in the magazine.

Of course, adding to all of this is many slick ads in-between. And after the Editor's Note, the rest of the magazine is just ads, mostly from mail-order companies. This section alone accounts for about one-fourth of the entire magazine.

Even if you can read Japanese, the sheer volume and breadth of information offered by this magazine is overwhelming. If you can't read Japanese, you still can enjoy looking at the photos.

Magazines like Asahi Camera play a major role and contribute enormously to photography in Japan. Magazines are a major outlet for professional photographers to sell and show their work. It enables the masses to keep up with the latest, to learn the basics, and to enjoy looking at pictures. (Reviewed by Philbert Ono)