Japan's most famous and controversial photographer.

Education Entered Chiba Univ. in 1959, graduated in 1963, majoring in photography and cinema.

Career Father was a geta clog maker from Minowa. Took his first photograph (of the Nikko Toshogu Shrine) while in the 6th grade on a school trip to Nikko with a camera lent by his father.

After graduating from college in 1963, employed as an advertising photographer at Dentsu Inc., a major advertising company. In 1965, produced a movie titled, "Satchin and His Brother Mabo" which brought him attention with the Taiyo Prize. The still photos were also featured in Camera Geijutsu magazine (edited by KUWABARA Kineo) in April 1964. He becomes good friends with KUWABARA Kineo.

In November 1993, the National Police Agency arrested several people at the Parco Gallery in Shibuya, Tokyo for selling Araki Nobuyoshi's photo book "Erotos" which was deemed obscene. The police confiscated copies of the book. The book was a record of works from Araki's AKT-TOKYO photo exhibit which was held in Austria in 1992. The Austrian publisher of "Erotos" was puzzled by the move since the book had received high acclaim in New York and other places.

Araki is a prolific producer of photo books and Japan's most famous photographer. He is also sometimes controversial. Nudes, genitalia, sado-masochist nudes, and nudes of young girls have provoked more than the police.

He has a loyal following of photographer groupies called "Araki-zoku" (Araki Tribe). People either love him or hate him (or his work). Personality-wise, he is a very jolly good fellow and fun to be with. His "mad professor" hairstyle also adds to his unique persona. A recent movie, titled "Himawari," was also made about his life with wife Yoko. See book reviews of his photo books. A representative work of one of Araki's most recurrent photo themes (the city of Tokyo).

Tokyo has long been one of Araki's pet themes. Street scenes, sex scenes, random scenes, and a-day-in-the-life-of-Tokyo shots are all part of it.

The first photo shows his apartment balcony covered with snow. The balcony of his apartment in Setagaya Ward in Tokyo is now famous since you often see it in his photos. Then there is his cat and wife Yoko. After that, it's a random barrage of B/W images taken in Tokyo. Mundane street scenes and street corners, parks, playgrounds, trains, and kids playing on the street. There is also a shot of an aerobics class for women, a swimming class for pregnant women, and a car accident. Since there are only four nude photos, this photo book is pretty clean for Araki.

At the end of the book, he explains that he loves Tokyo (being born and raised in this city) and that's why he often photographs it. The book starts from winter, then progresses to the following seasons until it's winter again. The photos were taken during 1987-1989. He also used 6x7 cameras.

Araki also generously provides a commentary on all the photos at the end of the book. One particularly funny episode was when he photographed a black man on a Shibuya street (page 80 in the book) who had gestured to Araki "no photos." But Araki took the photo anyway (with the flash firing) and when the man tried to throw down the camera, Araki ran. His flash unit fell off and was lost. "That was scary," he recalls. Still, he publishes this photograph in the book. Talk about a lack of respect for privacy. (Reviewed by Philbert Ono)

This book has two parts: Sentimental Journey shows some photos of his honeymoon with wife Yoko, and Winter Journey is photo diary of Yoko's final months before passing away in Jan. 1990.

The first part of the book reproduces 22 photos from Sentimental na Tabi, the photo book Araki published in 1971 at his own expense (1,000 copies selling for 1,000 yen each). The original book contained over 100 photos of his honeymoon with wife Yoko in 1971. It is one of his most famous works, being the start of his trademark photo diary style. It shows newlywed wife Yoko in the hotel room, sometimes nude, sometimes clothed. Yoko was a secretary at Dentsu, Japan's largest advertising company, where Araki worked.

It's too bad that all of the photos in Sentimental Journey are not reproduced in this book. Only the most important ones are. The most famous shot is the one showing her curled up like a fetus on a row boat. It's like birth and death combined (according to photo critic Kohtaro Iizawa). Then we have the lovemaking shot, and the last shot shows ruffled bed sheets which have become Araki's trademark.

This honeymoon was turned into a movie in 1997 titled "Tokyo Biyori" starring Naoto Takenaka as Araki and Miho Nakayama as Yoko. This first part of the book is just a minor section. The next part, Winter Journey, takes up the bulk of the book.

Winter Journey begins on May 17, 1989, Yoko's birthday. She and Araki are dancing and a friend is singing. Most of the photos are captioned so it is easy to follow what's happening. He writes that no matter how busy they were, they would always spend her birthday and their wedding anniversary (July 7) together. The photos rae imprinted with the date and presented chronologically.

On Aug. 16, 1989, the day he photographed the sky from the hospital waiting room while Yoko underwent surgery for a tumor in the uterus, doctors found that the tumor was malignant. He was told that she probably wouldn't make it, but he didn't have the heart to tell Yoko who was then hospitalized.

The doctor said that it would be okay for her to spend New Year's at home, but on Dec. 31 when he went to pick her up, her condition worsened and she could not leave the hospital. He instead lay together with her in her hospital bed and watched TV.

She thanked him for all the trouble she was causing and reassured him that she would do her best to recover. She thought he was really wonderful in doing all he was doing without her at home.

On Jan 16, 1990, Araki was told that she had 1 week left. But he still didn't tell her. But she seemed to know anyway. She grasped his hand and didn't let go. He walked to Waseda again, and it was snowing. While wiping off the snow on his eyeglasses, the frame broke. He photographed the broken glasses on a sheet of black paper.

On Jan. 26 while shaving, Araki gets a call from the hospital telling him that her condition had worsened. When he gets to her hospital room, she's already in a coma. He called to her desperately, wanting to hear any word from her as he put his ear over her mouth. She replied with, "Anata" (my dearest). He held her hand, and she gripped his hand in return. Then miraculously at 3:15 am, her eyes opened and sparkled. She kept shaking her head side to side saying that she didn't want to die.

The next morning on Jan. 27, she passed away at age 42. The photo diary continues on with what happened afterward. The wake, funeral (photo of her in the coffin bedecked with flowers), and cremation.

It's really mind-boggling that Araki was thinking of taking pictures even during this most difficult period. It really shows his human side, and one can only feel sorry that he lost his one and only soul mate. They were really happy together. (Reviewed by Philbert Ono) If you saw Sentimental Journey which was a photographic record of Araki's marriage and honeymoon with wife Yoko, you could say that this book is almost a sequel. Actually, this book gives Sentimental Journey more perspective since the photo collection starts in 1968 when Araki first met Yoko at a large ad agency and ends in 1977, six years after they got married.

The first photo shows with Yoko posing innocently with her female colleagues in the secretarial pool. She was 20 years old, and he was 27. This is followed by an incredibly wide variety of Yoko images--posed and candids, outdoors and indoors, and clothed and nude. Pictures that only a husband could take (especially the lovemaking shots).

She's on the train, in the hotel room, in the bath tub, in the kitchen, in the photo studio, at the beach, in a park, on the street, in a restaurant, etc., etc. There's one of her sitting on the toilet, and the photo afterward shows a long, snake-like piece in the toilet water. There's also a string of photos taken from Sentimental Journey (lovemaking and ruffled bed sheets). There's no question that this man was totally infatuated by her, and she had no qualms in being photographed by him.

Normal Japanese husbands don't even think about photographing their wives in such mundane places and poses. But now, after almost 30 years and 15 years since her too-soon death in 1990, these images must be extremely precious to Araki. What an incredible visual record of one's marriage and wife.

The book also has text written by Yoko who recollects their meeting, marriage, and days with her husband. 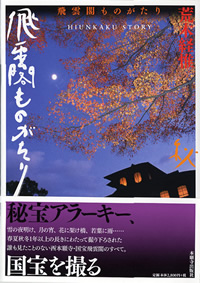 In a corner of the expansive Nishi Honganji Temple in Kyoto, there is the magnificent Hiunkaku pavilion built in the 16th or 17th century. It is believed that it was moved from Toyotomi Hideyoshi's Fushimi Castle to the temple. The building is a National Treasure and one of Japan's most elegant-looking buildings. It fronts a Japanese garden.

It's strange to see Araki photographing a building without any nude women. But since it is part of a Buddhist temple (Jodo Shinshu sect), I guess he had to behave himself. He did a good job in photographing it in all four seasons and from all angles.

This is the first time these two famous Japanese photographers collaborated on a photo book and exhibition together. The photos were taken by both men on the same day in Aug. 2004 in Shinjuku, Tokyo.

They just wandered around Shinjuku and snapped away. The book also served as the exhibition catalog for their joint exhibition at Tokyo Opera City near Shinjuku during early 2005. Some 200 images are in the book. Essays are all translated into good English.