Book review of Agnes Lum. Japan's most sensational bikini idol of all time. 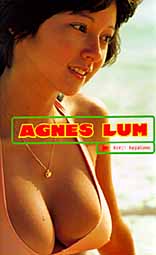 She is the mother of all bikini idols in Japan. No other bikini idol in Japan has ever achieved the level of sensation she generated during the latter 1970s. Something about her just clicked with many hot-blooded males in Japan (and Hawaii), and a phenomenon was born. Even now, it is difficult to pinpoint what it was. What did she have that put so many of us under her spell? Her pixie-cute face? Her smile? Her tantalizing body? Her tiny bikinis? Her exotic foreignness? It remains a mystery to this day. That's when we have to call it "magic." Yes, it was magic.

Now we have this photo book to help us analyze her more objectively. But it's hard, because these great bikini shots bring back memories and passionate feelings for her and for our younger days. Those of us in our late 30s and 40s who were in Japan at the time can reminisce the times when she elicited goddess-like adoration as we stared at her posters on our walls.

In case you don't know who Agnes Lum is, let me give a brief intro. Born in 1956 to a Chinese father and multi-ethnic (Hawaiian included) mother, Agnes is from Honolulu, Hawaii and she worked as a model during the mid-70s while still in high school. She was a prominent model and even won the title of Miss Hawaii but was later disqualified due to some technicality. She eventually found work in Japan and became the first Clarion Girl. Clarion is a well-known car stereo and audio equipment maker. From 1975, the company looked for an advertising campaign girl who was to appear on their publicity posters, pamphlets, etc. Agnes became the first Clarion Girl and it has since become an institution. The Clarion Girl is selected every year from among thousands of applicants. The lucky girl receives a lot of publicity, often serving as a stepping stone for better things.

Agnes won a phenomenal following in Japan almost from the time she first landed in Tokyo in 1976. She is by far the most popular foreign-bred, sexy idol ever to work full-time in Japan. No other bikini idol has surpassed the popularity and fame that she attained. Agnes inspired a few other bikini-clad girls from Hawaii to come to Japan. But till this day, none has ever attained the success Agnes enjoyed. She was one of a kind and in a class all by herself.

During her heyday in the late '70s and early '80s, Agnes was all over the place--on billboards, posters, magazines, calendars, TV commercials, and even a record album. (Her singing talent was not good, but the pictures on the sleeve were great.) All these items are now highly collectible and valuable. So finally, we now have an affordable Agnes Lum bikini photo book.

In 1984, she made her last TV commercial and then left Japan for good. Her time in Japan had run its course. However, she is still well remembered by many Japanese. Twelve years later in 1996, she returned to Japan to make a TV commercial for Daihatsu automobiles. She even brought her twin sons who were also featured in the commercial. She still has a very high name recognition, and the commercials were cute and family-oriented. (Her husband did not appear.)

In 1998, she put out a photo book (reviewed below) showing what she looks like today living with her husband and sons on Kauai. When I reviewed that book, I wished for a photo book showing her bikini photos from the 1970s, and with this latest book, my wish has come true.

It is extremely rare for a bikini idol to be remembered even after 20 years. The vast majority just fade into obscurity forever. But not Agnes. She is legend in Japan. This book is such a great remembrance for her (and our younger days) and an excellent visual record of a historical figure in Japanese pop culture. Perhaps the current generation may fancy her as well. And the bikinis she wears don't look that dated except for the bikini bottom which is not in the "high-leg" or high-cut style. But they are still as skimpy as they can be.

The book comes in a large format size (26 x 37 cm) which makes the color pictures all the more glorious. You can easily cut out the pages and frame them. (Buy an extra copy for this purpose.) She's on location in Hawaii, mainly Kailua Beach (she's originally from Kailua) and Waikiki. She's also posed at the University of Hawaii gate on University Ave. and on the lawn of a house in Manoa (you can see Tantalus Drive in the background). Most of the photos show her in a bikini on the beach. The bikinis (orange knit and light pink) are readily recognizable because her most famous posters featured her in them.

The series of photos of her in a light pink bikini on Waikiki Beach are the best in the book (in the background you can see the twin towers of the Hyatt Regency being built). She's breath-taking alright. The highlight is her cleavage and her small, pixie face which can show a variety of expressions. Her legs are thicker than the ideal, but it's due to her slightly wide hips. But who cares? She looks good in any case. Some photos are really high-resolution--you can count the small body hairs or the goose bumps on her skin. The book also has a large centerfold poster that you can unfold to see her lying down on the beach in a red bikini. All the photos were taken on Oahu. There are no pictures of her in Japan. Too bad there're no shots of her in a kimono.

The photos used on some of the best-selling posters (as many as 100,000 copies) of Agnes during the late '70s were taken by the photographer of this book. So he has a very good stock of Agnes Lum photographs which has been preserved very well, thankfully. Another photographer with a good bunch of Agnes Lum photos is Hogara Iketani. I hope he will someday re-release his photos of Agnes in a book like this one.

The book climaxes at the end with a handwritten letter from Agnes herself. Addressed to all her friends in Japan, she says that it is "an honor" to be remembered even after 25 years. The photographs brought back many "treasured" memories for her (and us). She was 18 years old when she landed at Haneda Airport while wearing heavy sweaters in the cold. She got over her homesickness and embarked on a "wonderful career" while working with the best stylists, photographers, and directors to advertise everything from cars to cosmetics. She also mentions that singing was most difficult and hints that she was forced to do it. (The record she put out must have been an embarrassment because she was not a singer.) She also thanks everyone for all the wonderful experiences and memorable moments during her unforgettable years in Japan.

The book was published with her official blessing, and she still feels thankful for her years in Japan. Well, it's now our turn to thank her. On behalf of all her male fans, I want to thank you Agnes for giving us something to cherish and be crazy about during our younger days. (Reviewed by Philbert Ono)