Difference between revisions of "TSUZUKI Kyoichi"

TSUZUKI Kyoichi 都築 響一 (1956-) Photographer and magazine editor of art books. Columnist for Spa magazine showing the unusual sights and places of Japan. The column has been compiled in book form called Roadside Japan for which he won the Kimura Ihee Award. 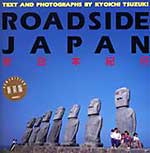 Voluminous book showing places and things you never imagine to be in Japan. This book has been reissued in Mar. 2001.

This monumental collection of photos has won its photographer the 23rd Kimura Ihee Photography Award in 1997. It is a vast presentation of unusual and surprising sights and things in Japan unseen by most of us. Have you ever seen a bus stop shelter shaped and colored like a giant strawberry or melon? How about statues of standing frogs all over the grass with a sign saying, "No trespassing"? Then thereis a national highway which consists of a flight of zigzagging stone steps and a narrow alley where no cars or bicycles can pass.

Some things may be laughable, but many others are stranger than fiction. This photo book is overwhelming in terms of subject matter, variety, and volume. The captions, provided in both Japanese and English and written by the photographer, reveal the locations where the photos were taken. The photos look like they were taken by a curious tourist (who just happened to be passing by). Taking pictures of unusual or funny things is nothing new. However, this photographer has made it an exhaustive pursuit.

The pictures in this thick, heavy book are divided into categories such as Gods and Buddhas, Monuments, Sexplosion, Natural Science, and History Revisited. This book can easily serve as a tourist guide book for tourists in Japan tired of visiting the usual temples and shrines. All travel agents catering to tourists going to Japan should obtain a copy.

Roadside Japan is a compilation of 150 installments of a short photo essay series called "Chin Nihon Kiko" published in a weekly gossip magazine called "SPA!" The series started in 1993 and it still continues. The photographer and author, Kyoichi Tsuzuki (b. 1956), is actually a freelance editor rather than a photographer. However, he has previously produced a photo book (his first) in 1993 called, "Tokyo Style" which showed photos of living rooms of young people living in Tokyo. Tsuzuki is the first non-photographer (by occupation) to have won the prestigious Kimura Ihee Photography Award. This book went out of print temporarily, then was reissued in March 2001 at half the price of the original book published in 1997. The only difference is that it now has a soft cover instead of a hard cover. (Reviewed by Philbert Ono)