In Jan., the Leotax camera is sold by Showa Kogaku Seiki. It was a copy of the Leica 35mm camera except for the rangefinder which was not coupled to the lens.

On July 7, camera production was restricted for military purposes only, stunting the growth of the Japanese camera industry.

In July, the Zenkoku Shashin Kikai Seizo Kogyo Rengokai association of photo equipment makers is formed to negotiate with the government on photography equipment matters such as official pricing revisions and equipment procurement and exportation.

On Jan. 1, Imperial Navy photos of the Pearl Harbor attack are allowed to be published in Japanese newspapers for the first time.

DOMON Ken's photos on farming villages, portraits, etc., are published in a number of magazines earning him widespread recognition.

In Nov. various photo exhibits for military propaganda are held in department stores in Tokyo and other cities. Exhibit themes include the military in Manchuria, Burma, air wars, and youth brigade military schools.

Due to a military supply company law enacted in Dec. 1943, most of the major Japanese photo equipment and materials manufacturers are forced to cooperate in the war effort.

In the spring, various photo exhibits for military propaganda are held in department stores in Tokyo and other cities. 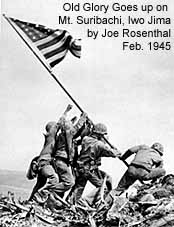 In February 1945, Associated Press photographer Joe Rosenthal on Iwo Jima captures a Pulitzer Prize-winning shot titled, "Old Glory goes up on Mt. Suribachi." The photograph shows a few US soldiers pushing a large American flag upright on the captured mountain. The photo is published on the front page of the New York Times and later serves as the model for the Iwo Jima Memorial in Washington D.C. It becomes one of the most famous war-time photos in history.

In March, Tokyo air raids burn and flatten much of the city. The National Police Agency's ISHIKAWA Koyo photographs the devastation, later published in 1953.

On Aug. 6, an atomic bomb is dropped on Hiroshima. This is followed by another atomic bomb on Nagasaki on Aug. 9. Japan consequently surrenders on Aug. 15.

Hiroshima's mushroom cloud is photographed by YAMADA Seizo outside the city as well as by a junior high school student named FUKADA Toshio (four successive photos). MATSUSHIGE Yoshito photographs the Hiroshima victims near the epicenter right after the explosion. Another photographer named KISHIDA Mitsugi photographs the devastation on the morning after. On Aug. 10, army photographer YAMAHATA Yosuke photographs the aftermath in Nagasaki. His photos still receive high acclaim today.

On Aug. 21 and 25, all the major Japanese newspapers publish photos of Nagasaki taken by YAMAHATA Yosuke. 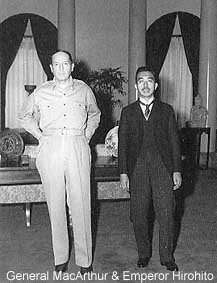 In Sept., Emperor Hirohito visits General Douglas MacArthur at the American Embassy where they are photographed together. In the photograph published in Japanese newspapers on Sept. 29, the Emperor stands straight and at attention contrasting sharply with the General's casual, hands-on-hips pose. The Ministry of Home Affairs at first banned the publication of the photo, but was later overturned by the GHQ (General Headquarters).

During the first few years after the war ended in 1945, Japan faced severe shortages of raw materials. Camera companies were short on materials and capital to rebuild. They had to think about sheer survival rather than developing new cameras. Thus, the first Japanese cameras after the war were pre-war carryovers.

In Dec., the domestic manufacturing of film and cameras was restarted. However, the production volume was still low and most of the output went to supply the Occupation Forces, leaving little for the rapidly-increasing domestic demand. In large cities, a black market for film and cameras appeared.

Camerabug American soldiers of the Occupation Forces commented that there were too many names to remember with regard to Canon cameras: lenses by Serenar, cameras by Canon, and the manufacturer was Seiki-Kogaku Kogyo. Company president MITARAI Takeshi took this to heart and changed the corporate name to Canon Camera Company Ltd. on Sept. 15, 1947. This name was later modified to Canon Camera Company Inc. in early 1951. The present corporate name of "Canon Inc." was adopted in 1969.

In Oct., the Ginryusha photographers club was formed by HAYASHI Tadahiko, HIGUCHI Tadao, KUWABARA Kineo, and others.

In Nov., Shukan Sun News magazine is started with NATORI Yonosuke as the editor. This is a weekly devoted to photo documentaries modeled after Life magazine. (Folds in Jan. 1949 after 41 issues.)

Chinon Industries, Inc.'s forerunner, Sanshin Seisakusho, is established by CHINO Hiroshi to manufacture lens barrels and mounts for cameras such as Olympus, Ricoh, and Yashica. It started manufacturing lenses from 1959. The corporate name was changed to its currrent one in Jan. 1973.

After being dissolved after the war which destroyed most of the factory, Asahi Optical Co. was restarted. It made binoculars for export.

In April., Canon Camera Company markets the Canon IIB 35mm rangefinder camera having a viewfinder which could switch magnifications to match the field of view for the 50mm, 100mm, and 135mm interchangeable lenses. This useful and unique feature helped to establish Canon's reputation for the following 10 years. The camera remained in production for 3 years.