World-famous sculptor. Best known for his Tower of the Sun sculpture at Expo '70 in Osaka. 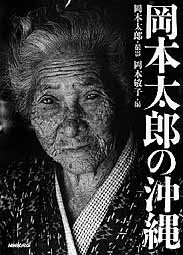 The late Taro Okamoto (1911-1996) is one of Japan's most famous sculptors. His most famous piece is the giant Sun Tower built for Expo '70 in Osaka. It still stands in the Expo '70 Commemoration Park. The Sun Tower has become a classic, one which prompted many people to become fans of Okamoto.

Okamoto was also an avid photographer. And like many people (especially photographers) from mainland Japan visiting Okinawa for the first time, he found the island prefecture to have compelling elements of interest. In Okinawa, he aimed his camera at the people, lifestyle, customs, rituals, and everyday activities of the locals.

He visited Okinawa for 10 days in Nov. 1959, and again in 1966. He visited the main island of Okinawa, Kudaka island (a small island off the east coast of the main island), Ishigaki island, and Taketomi island. The outer islands are where you will find more of the traditional aspects of Okinawa, and he was wise to visit the smaller islands.

The book includes an essay by his wife Toshiko who is also the director of the Taro Okamoto Museum of Art in Kawasaki, Kanagawa Pref. She states that the aim of the book was not to show how Okinawa was in the past, but how the Okinawa of the past still exists today. In other words, she wanted to show how timeless the photos are, thereby establishing a connection between the past and present. And that's the main concept of this book.

In April 2000, she took some of the photos her husband shot and revisited the places in Okinawa where she went with her husband some 40 years before. She found that many of the scenes and things he photographed can still be found. It proved that Okamoto captured the timeless aspects of the Okinawan lifestyle and culture.

In her essay, she goes on to describe her recent trip to Okinawa, her memories of Okamoto and Okinawa during the first two trips, how things have changed or not, and how she tried to find people who could identify people in the photos taken 40 years ago.

She recalls that Okinawa excited Okamoto very much as he took pictures. He never used a camera assistant and always carried all the equipment and reloaded the film in the camera by himself. He didn't carry a light meter, but always got the right exposure under a variety of lighting conditions. He also had a good eye for composition and most of his photos did not require any cropping.

He photographed many elderly Okinawans with their wrinkled faces and sometimes ragged clothing. Since Okinawa has one of the longest life expectancies in world, it's one place where you can find many old people. Their long life is mainly attributed to Okinawa's laid-back lifestyle, stress-free attitude, and the elderly's active participation in society. The faces of the elderly are etched with a strong sense of purpose, whether they are selling fish or vegetables in the public market, weaving traditional cloth, or working in the farm field. He also photographed children.

Some photos I found striking. The grass shacks, the corrugated aluminum roofs, women carrying a heavy load on their heads, a mother breastfeeding her baby while selling vegetables in the public market, elderly women wearing kimono, a tree trunk serving as a telephone (or power line) pole, and other things. Okinawa was obviously still poor, and I wonder what happened to all those shanty shacks when a typhoon hit.

No doubt, Okinawa has undergone many changes in the past 40 years, and it's good to see that there are still pockets where time has stood still. (Reviewed by Philbert Ono)