Maibara (米原市; Maibara-shi) is a city in northeastern Shiga Prefecture, Japan. The west end of the city fronts Lake Biwa, the north borders on Nagahama, and the mountainous east side borders on Sekigahara, Gifu Prefecture. It is best known nationally for JR Maibara Station which is Shiga's one and only shinkansen bullet train station and one of Shiga's main gateways. Maibara Station is also a transfer point between the busy Tokaido Main Line and Hokuriku Main Line which goes to the Hokuriku region. It is also a terminal station for Ohmi Railways which goes mainly to Higashi-Omi. Maibara is right between Hikone and Nagahama cities.

Much of the city is still quite rural, with the population scattered over a wide area in former towns, most of them along the Tokaido Main Line. Even the area around Maibara Station is not highly developed, although it has a decent department store (Heiwado) and the local city hall. The old Nakasendo Road also passes through Maibara where Kashiwabara, Samegai, and Banba were former post towns or stations called shukuba. Oda Nobunaga, Toyotomi Hideyoshi, and Tokugawa Ieyasu have all lodged at Kashiwabara-juku while they were traveling along the Nakasendo.

The northern area is anchored by Mt. Ibuki, the city's most prominent landmark and Shiga's tallest mountain. Being in northern Shiga, Maibara often sees snow in winter, especially in and around the Ibuki mountains. The Anegawa River and Amanogawa River empty into Lake Biwa, and about 70 percent of the city comprises forest land. The city thus boasts an abundance of water and greenery.

One major issue at the forefront in Maibara (and Shiga) is the routing of the Hokuriku shinkansen to be built between Tsuruga (Fukui Pref.) and Osaka. Maibara and Shiga Prefecture wants it to go through Maibara Station instead of Obama (Fukui) or Maizuru (Kyoto) which are two other alternatives being considered by the railway company. 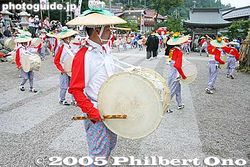 Ibuki Taiko Drum Dance held every 5 years at the foot of Mt. Ibuki.

Maibara is served by three train lines and a local bus system. A community taxi service where passengers share a taxi is also available. Rental bicycles are available at Maibara Station (details below).

The JR Tokaido Main Line, Hokuriku Main Line and Ohmi Railways pass through Maibara. The major sights and destinations along Maibara's train stations are as follows:

There is a local bus called Kamon bus (little red and blue van) which runs infrequently within the city, stopping at Omi-Nagaoka Station, Kashiwabara Station, Lucci Plaza, and other stops.

At Maibara Station, the Ohmi Railways bus operate buses which go to Nagahama.

Click on the video image to start playing it.

Chiyo
From the Sakata area, wife of Lord Yamauchi Kazutoyo during the 17th century.
Yamagata Hiro
Print artist from Samegai. At least one of his posters hang in the Maibara City Hall.

Other sights in neighboring cities/towns within easy reach from Maibara.