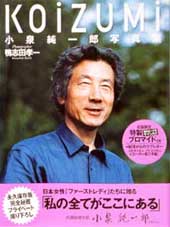 Ever since his election as Japan's prime minister in April 2001, Jun'ichiro KOIZUMI has enjoyed phenomenal popularity and support among the masses. He has reached pop idol status among people of all ages from elementary school girls to elderly women. For Japan itself, he is a strong breeze of fresh air and a shining light of hope following one of the most unpopular Japanese prime ministers in history (Yoshiro MORI).

Born in 1942, Koizumi grew up in Yokosuka, Kanagawa, home of a large US Navy base. He graduated from a local high school, then went on to Keio University to major in economics. After graduating, he studied in London, England. His political career started in 1970 when he worked as a secretary for National Diet member Takeo FUKUDA who later became prime minister. In 1972, he won his first election to the National Diet at age 30, representing his local district of Yokosuka and Miura.

In 1988, he served in his first cabinet post as Health and Welfare Minister. In 1992, he was appointed by Prime Minister Kiichi Miyazawa to be the Posts and Telecommunications Minister. In 1995 and 1998, he was a candidate for the Liberal Democratic Party's presidency (and therefore the prime ministership), but lost. In 1996 and 1997, he again served as the Health and Welfare Minister. In 2001, in his third attempt, he finally was elected as the Liberal Democratic Party President and was consequently installed as Prime Minister.

He was married once to a college coed, but they divorced in 1982. The union produced three sons. (The third son was still in the mother's womb when they divorced.) He raised the two eldest sons, while she raised the third son who never met his father until recently. Koizumi vowed not to remarry because a divorce required ten times more energy than a marriage.

Before becoming prime minister, Koizumi was already a well-known maverick in Japanese politics. It was his "abnormal" quality that always made him a long-shot to become prime minister.

But in the year 2001, it was this maverick quality which ironically got him in the prime minister's office. People were sick and tired of the old, inept, and corrupt ways of the dominant Liberal Democratic Party and sought change. Koizumi represented radical change, something which everyone yearned for. During his election campaign, he promised change, and also exhibited a charm and charisma that clicked with people en masse.

The result was huge crowds wherever he went, especially when popular Makiko TANAKA (now Foreign Minister) was campaigning at his side. A phenomenon was being born, and soon there was little doubt who the next prime minister would be. At last, the time had come for him to meet and fulfill his destiny. And the timing couldn't have been better.

Koizumi-mania still continues after his election. He still draws huge crowds wherever he goes. His approval rating has soared like no other prime minister before him. Election campaign posters with his forward-looking visage (see image) also sold like hot cakes even to teenage girls. His likeness can be found on T-shirts and other souvenirs. His "image character" is a benevolent lion face with his trademark mane.

And now we have this photo book. In Japan, having a photo book is the ultimate symbol of being a pop idol besides having a concert at Tokyo Dome or the Budokan. This book was published with the blessing of the prime minister himself. He even endorsed it with the phrase, "Watashi no subete ga koko ni aru" (which roughly translates as "Everything about me is in here"). The photographer had been photographing Koizumi for the past 10 years. The Japanese press had a field day reporting the publishing of this photo book.

The photos are a hodgepodge of color and B/W shots. They are not in any order or in any chapters. The photos are numbered, and Japanese captions (in Japanese only) are provided at the end of the book. The book tries to show Koizumi the politician as well as the ordinary, human side of him. The photographer obviously had excellent (or exclusive) access to him. You might call him Koizumi's official photographer, although this is not stated. He intends to keep photographing Koizumi. He sure got lucky.

The book starts with photos of Koizumi vacationing in Hakone in August, the month before the book was published. Other shots in very recent memory include him handing the Emperor's Cup to tournament winner Yokozuna Takanohana, campaigning with Makiko Tanaka, first son Kotaro at a press conference announcing his plans to join the entertainment world, and a formal portrait of Koizumi and his Cabinet at the Imperial Palace. In-between we see quaint photos of his younger days playing with his two young sons practicing their baseball batting in their backyard. We also see him at home or in a hotel room relaxing (usually reading a newspaper or book or listening to music). He loves noodles, so there is a series of him eating ramen in a favorite restaurant.

One large picture of a huge crowd probably says it all about his popularity. There are people of all ages, both male and female, cheering and clapping. Many of them are raising their cameras over their heads to take a picture of him. And there's one young woman who is holding up her cell phone in the air so that her friend (or mom?) on the other end can hear him too.

What's missing are pictures of his former wife and third son. There are also no photos of his controversial visit to Yasukuni Shrine in August where he paid his respects to Japan's war dead. So, the book does not contain everything as he claims. (Reviewed by Philbert Ono)

Note: His first name is often mispronounced in English due to the ambiguous way it is spelled. A lot of people in the media call him Juni-chiro. It's actually pronounced Jun-ichiro. Therefore, it should be spelled Jun'ichiro to better aid in the pronunciation.