Buying a flat-panel TV in Japan 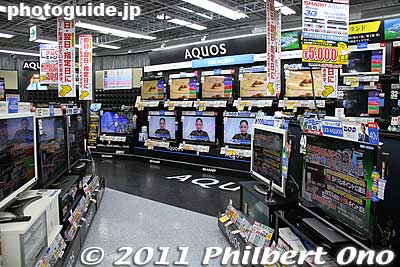 Last Nov. 2010 was a buying frenzy for TVs in Japan. Electrical appliance stores sure made a killing with so many customers every day until Nov. 30, 2010.

I was one of them, and in late Nov. 2010, I waited behind 30 people for about an hour to get hold of a salesman at my local Yodobashi Camera store, a large camera/electronics retailer in Japan. Even if you had already decided which model to buy and just wanted to fork over the cash to buy it, you had to wait.

The buying frenzy was caused by the Dec. 1, 2010 deadline imposed by the Japanese government when its Eco-point system would be dramatically revised. The Eco (i.e. Ecology) point system is a governmental reimbursement program for purchases of TVs, refrigerators, and air conditioners. Buy any of these products and you will receive Eco-points which can be exchanged for gift certificates or other cash-equivalent things. One Eco-point is worth 1 yen.

How many Eco-points you receive depends on the model and energy efficiency (rated from 1 to 5 stars) of the product. The program is to encourage people to buy more energy-efficient and environment-friendly appliances and switch to digital TVs in preparation for Japan’s switchover to all-digital TV broadcasting in July 2011.

To convert your Eco-points into a gift certificate accepted at most stores in Japan, you have to send to the Japanese government an application form and include the receipt and a copy of the product warranty. Your dealer can help you with that. Then a few months later, you will receive a postcard which you take to your dealer to exchange it for gift certificates (usually 1000 yen denominations).

I waited till the last minute to buy a new TV because I could not decide on which brand/model to buy. I also thought that I should hold out for newer and better models. I was actually planning to buy a TV in June 2011, but the announcement of the Eco-points being halved after Dec. 1, 2010 spurred me and many others here to buy a new TV now.

So after you decide to buy a new TV, you have to decide which one to buy. Japan has so many famous brands and none of them have a compelling reason for you to go with that one instead of another. The Big Four TV brands in Japan are Sharp, Sony, Panasonic, and Toshiba. There are other makers like Mitsubishi and Hitachi, but they occupy way less shelf space in stores. Unlike in the US, Samsung TVs are nowhere to be found in Japan.

Sharp is especially popular due to their fine reputation for flat-panel displays. Their Aquos brand is associated with high-quality displays in both TVs and cell phones. The problem was, I would have had to wait 2 or 3 months for the Sharp TV to arrive. Order in Nov. and arrives in Feb. I couldn’t wait that long so I went with another brand.

You can look at a Sharp TV and compare it to a comparable model of another brand, but can hardly tell the difference. I looked at all the TVs on display and could not say which looked better. This led me to conclude that on a practical level, the brand didn’t really matter much unless you’re a fan of a particular brand.

So I have no advice as far as the brand is concerned. But I noticed that certain brands and models are discounted more than others. My particular TV had a 20% discount which was more than the usual 13% or 15% discount. Certain models also have a better value for the price, and my TV was one of them. Before I bought my TV, I bought a Japanese magazine which reviewed all the TVs on the market. That really helped me to compare features and prices. The magazine also identified the TVs offering the best value for the price. Another way to choose a brand is to consider other products you might want to buy, such as a camcorder or DVR/Blu-ray recorder. Sticking with the same brand for all your video equipment usually makes things easier.

Also, LED TVs seem to be coming to fore, instead of non-LED TVs. The newest LCD TVs all seem to be LED models. Customers know that LED consumes less energy, provide a brighter picture, and have a thinner profile. And from what I’ve seen, the price difference between LED and non-LED models is not much. Get an LED TV.

One of the first things you have to decide is the screen size. Basically, the bigger the better. Most TV reviewers say that the minimum should be 32 inches for a living room. Having a 32-in. TV myself, I tend to agree. Although I think a 40-in. screen would make TV viewing a lot more pleasant if you have the room and cash to get one. If you have a six-mat room, a 32-in. TV would fit the bill, but you might still wish for a bigger TV. Interesting how the TV looks smaller in your house than when you saw it in the store.

Next, you have to decide on the features. I noticed the following types of feature sets in the latest TVs:

Before you decide on the feature set, you have to think about whether you will also buy a DVR/BD-R deck which can cost as much as or more than your TV. If you already have a DVR or plan to buy one, then get a TV with no recording function. Those models are really cheap and a good deal. You might think that it might be cheaper to buy a TV with a built-in HDD and BD-R than to buy a DVR/BD-R deck separately. Not really. TV makers want you to buy a separate DVR/BD-R deck so TVs with a built-in HDD and Blu-ray recorder will cost about the same as a basic TV plus a separate HDD/BD-R deck.

If your TV only has a Blu-ray recorder, you will need to insert a Blu-ray disk each time you want to record something. A standard Blu-ray disk holds 25 GB of data which is not much if you plan to record a lot of programs while on vacation. Built-in HDDs are usually at least 250 GB. An external HDD can be a lot larger. So if you want a TV with recording function, I would recommend recording to an external HDD unless you really want Blu-ray.

The problem with Blu-ray is that it’s still not widespread. I don’t really have friends/relatives who have a Blu-ray recorder or player. DVDs are still much more common here in Japan. Blu-ray is not gonna take off until it’s introduced in personal computers (i.e. Mac). They also have to make BD-R decks cheaper, on par with VHS tape decks. It’s still too expensive even though the price of a standard 25GB Blu-ray disk is now less than 200 yen. It’s a shame because Blu-ray does have definite advantages over DVDs which I find to be too small for high-definition videos. The slow spread of Blu-ray is a far cry from the quick adoption of CDs and DVDs by consumers.

As I shopped for a TV in Tokyo, I was amused by the weird product names that they all use. Like Bravia (a mistake for bravado?), Viera (related to Spanish name Vierra?), Regza (reggae music?), and Aquos. Aquos is Sharp’s well-known brand because it is also used in Sharp’s cell phone screens. It sounds nice, but I always wondered why they made it sound so similar to “aqua.” There’s no water involved. Not only that, the actual product designations like TH-L32R2 , LC-32DX3, LC-32DR3, etc., are just impossible to remember.

What happened to names like Sony Trinitron? (The name of my old TV.) That was a good-sounding name, easy to remember, and it was related to the actual technology behind it. Wish they could create names like that again. But then, the Japanese are notorious for creating and using strange or mistaken or laughable English. 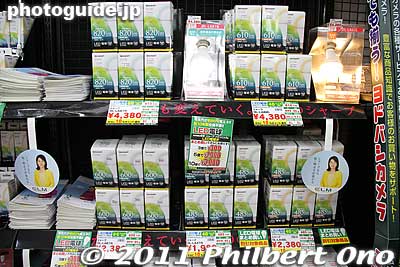 My new TV arrived about a month after I ordered it in Nov. 2010. A one-month wait was tolerable, and it was just in time for me to record a TV series starting in early Jan. 2011. If you’ve never bought a flat-panel TV before, you might be surprised when you first turn it on. There’s no picture. You instead see on-screen instructions to first set up your TV. It’s simple enough, but you will have to be able to read Japanese. You have to select the region where you will use the TV, enter even your postal zip code, etc. After the setup is done and the TV picture appears, you feel relieved and happy that you’re finally entering the digital age.

I’m impressed by the picture quality compared to my old standard-definition TV, but skin tones still look a little too artificial/electronic and maybe too pink at times. But the human eye is quite forgiving and I know that I won’t mind it so much. I like the on-screen TV schedule display which I can use to program the TV to record programs. (Of course, you have to read Japanese to read the TV schedule.) I also love the picture quality of the recorded programs. They look the same as the actual program. Unlike videotapes which always degraded the picture quality. The TV’s sound quality was quite chintzy out of the box, but fortunately the bass/treble could be adjusted and it now sounds good enough without me having to buy external speakers. Another great thing is that the slim TV frees up a lot of space in front of it, previously occupied by the big CRT. Well, after putting it off for so long, I’m glad that my TV hunt is finally over. 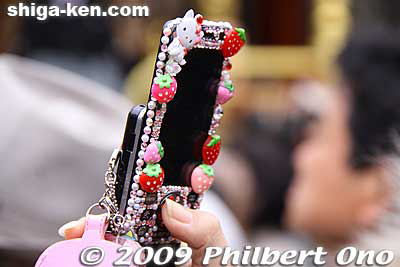 Spotted this camera phone while I was watching a festival in Nagahama, Shiga Prefecture. It’s not a clamshell type phone. The top slides upward to reveal numeric keys underneath. Such extreme decoration wouldn’t work on a clamshell phone.

I bet she had it done professionally.

Well, another New Year’s has come and almost gone. It’s kind of sad to note that New Year’s in Japan is different from before. It is not as special as before, like maybe 20 or 30 years ago.

Here are my then-and-now comparisons:

– New Year’s was the Japan’s biggest holiday and national observance. Most shops and businesses closed for almost a week during the year end and New Year’s. We had to stock up on food before the holiday started or face holiday  starvation. Now, most stores are open throughout the New Year’s holidays, not to mention the ubiquitous 365/24/7 convenience stores.

–  Nengajo or New Year’s postcards was once all handwritten before the advent of inkjet printers. People practiced their finest calligraphy with sumi ink and a brush when writing the addressee’s name and address. Today, few people use a brush to write nengajo. And many use inkjet printers.

– The news has reported that fewer nengajo are being sent. Many are sending New Year’s greetings electronically via email (including cell phone text messages). Many people also think of writing and sending nengajo a big chore.

– Much fewer people wear kimono when going to pray at shrines during New Year’s (hatsumode). It’s quite rare to find kimono-clad women even on New Year’s Day at Tokyo’s Meiji Shrine.

– NHK TV’s Kohaku Utagassen Red and White Song Contest aired on New Year’s Eve continues to draw fewer viewers. It is no longer a “must-watch” program (for those of us in Japan anyway).