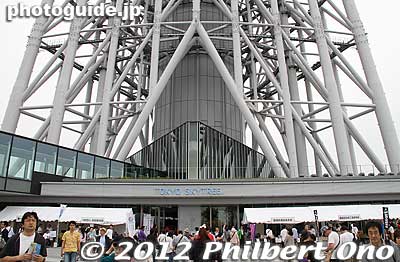 Congratulations to Tokyo Sky Tree and people in Sumida and Taito Wards for today’s official opening of Japan/Tokyo’s mega tourist attraction of the century. It’s going to be very difficult to top that (literally even) anytime soon.

Since I live in eastern Tokyo, I obviously have great interest in the Sky Tree. But it’s not only because I can see it from my bedroom window. It’s also because the tower is very inspiring and confidence-building to the Japanese. It produces national pride in many positive ways, not to mention economic benefits.

The indigo-white tower is actually very Japanese, from its structural design based on Japanese pagodas, to the elevators with an interior design based on Sumida Ward’s four seasons. The Solamachi shopping complex also integrates traditional shitamachi concepts.

Tokyo Skytree is a symbol of Japanese pride in their heritage, culture, and traditions co-existing with modern elements. I salute the designers/builders of Tokyo Skytree for showcasing Japan’s traditional beauty and elegance in such outstanding ways.