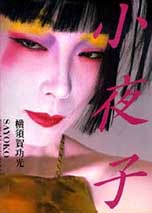 I was shocked and saddened to hear that Japan’s one and only super fashion model, Sayoko Yamaguchi, died of acute pneumonia on Aug. 14, 2007. She was 57.

She was by far, my all-time favorite fashion model, even though I never saw her in person. One of the most photogenic women in the world, she was the epitome of Japanese chic and fashion. It wasn’t just the way she looked or what she wore. It was also her attitude and inner spirit.

She was in a class all by herself, and no Japanese fashion model since the 1970s has ever come close to her looks, fashion, mystique, elegance, class, and attitude. She will be sorely missed by the fashion world and photographers alike.

She sought to promote Japan and Japaneseness. Her okappa short bob hairstyle was a trademark. It was the traditional haircut for little Japanese girls. It’s the hairstyle that looks like someone covered her head with a bowl and just cut the hair along the edge of bowl. Straight bangs are cut straight across the forehead, and the rest of her hair is cut straight all around her head.

Who else can make a major fashion impact with this chawan cut?

Another Japanese legend I missed seeing in person.

This guy named ricky liow plagiarized my essay on Sayoko (Update: he has deleted the plagiarized text):
http://www.rickyliowsayokoyamaguchi.blogspot.com/