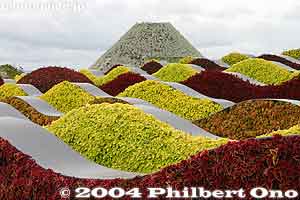 This flower expo is being held until Oct. 11, 2004 along the shore of Lake Hamana near Hamamatsu in Shizuoka Prefecture. The official name in English is “Shizuoka International Garden and Horticulture Exhibition.” To confuse us further, they also say “Pacific Flora 2004.” In Japanese, it’s “Hamana-ko Hana-haku” (Lake Hamana Flower Expo) which is much simpler.

If you like flowers and/or gardening/bonsai or taking pictures of your girlfriend or kids with flowers, visit this expo.

I saw everything in one day, but it wasn’t crowded at all. Probably because it was right before the Obon vacation season in Aug. They have a few pavilions, but no real amusement or rides like bigger scale expos.

Don’t miss going up the Kirameki Tower for a magnificent view of the entire area including the lake. The elevator going up is quite small though, fitting only 15 people. You have to go there early to get a reservation ticket which tells you the time when you can enter.

For lunch, the Unagi-kan restaurant near the tower served delicious unagi eel produced in Lake Hamana (no imported eels I was told).

FujiFilm has a small pavilion which is a photo gallery. See the late Shotaro Akiyama’s photos of flowers. (He’s a famous Japanese photographer.)

They also got international outdoor garden exhibitions by countries like Thailand, Bolivia, USA, China, Korea, and Australia. But nothing from Hawaii!! (Can’t call anything “Pacific” without including Hawaii.) At least one pavilion had a hibiscus (Hawaii’s state flower) corner.

There are buses shuttling from Hamamatsu Station (30 min.), but the closest station is JR Maisaka Station (10 min.).

This is the third flower expo in Japan that I can recall. Osaka in 1990 (there was a Hawaii Pavilion) and Japan Flora on Awaji island in 2000.